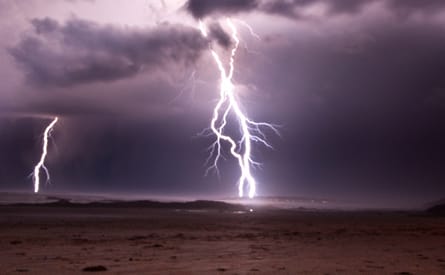 The patient needing Fulgurite will feel invaded, penetrated, and obliterated. There may be sensations of heat, burning, pressure, and razor sharp pains that come with speed and great intensity. This feels like an invasion taking the patient over with overwhelming violence. It has the feeling of electricity. They may feel dizzy, staggering, have flashing vision, and may see parallel lines between the sun and themselves. There are distortions of space, sensations of flying and of falling and being killed. A sense of blocked energy may feature, and an ensuing tension that builds and builds. Connection is important, especially to the Earth. The light side of Fulgurite is colourful and vibrant, with intense feeling of liberation and release. The dark side is one of feeling lonely and abandoned. There is intense itching.

Lightning-struck sand: The word fulgurite derives from the Latin word 'fulgur', meaning 'thunderbolt'. Sand fulgurites are formed in deserts when the intense heat of a lightning strike, that is generated by electricity, melts and fuses the sand (that is rich in silicone dioxide) around it. Fulgurite is classified as a mineraloid (not a crystal) because the sand is transformed when it cools and solidifies. The best-known fulgurites are found in quartz sands, where they take the form of glass-lined tubes, that may be branched, sometimes exceeding half an inch or more in diameter. The outer surfaces of fulgurites are often sandy and the inner surfaces are smooth and glassy. Fulgurites can also be formed by meteorite impact, volcanic explosions, man-made electrical arcs and high voltage discharges. In all cases of formation, the temperature must be at least 1,800° C to fuse the silicone dioxide. The event of transformation is roughly 30 microseconds.

The gods: Many cultures have myths about a god who is the source of thunder and lightning. Such a god does not have a typical depiction and varies according to the culture. In Indo-European cultures, the god of thunder is often known as the chief or king of the gods, e.g. Indra in Hinduism, Zeus in Greek mythology, Perun in ancient Slavic, or Thor in Norse mythology. Zeus, god of the sky and ruler of all the gods on Olympus, is well-known for the lightning bolt he brandishes. His portrayal in Greek mythology is that of a powerful leader responsible for justice and mercy; the lightning bolt being used to punish those who transgress. Perun is described as a rugged man with a copper beard. He rides in a chariot pulled by a goat buck and carries a mighty axe. Thor is fierce-eyed, red-haired and red-bearded. He is the hammer-wielding deity associated with lightning storms, oak trees, strength, the protection of mankind, and also healing and fertility.

The lightning bird (hammerkop): features heavily in the folklore of Zulu, Xhosa and Pondo African tribes. The creature is black and white and depicted with red and green iridescent feathers. The hammerkop is associated with witchcraft and it is said that the bird is a vampire who feeds off blood and has the power to summon bolts of lightning to shoot forth from its claws and wings. Legend describes the bird having the ability to transform into a good-looking man in order to seduce young women.

Religion: In the Christian Bible there are many occurrences of lightning being hurled down from the heavens. This was described as an act of punishment by God, striking those who had done wrong, and as the brightness of God’s presence blazing forth. Over time, religious buildings and icons have been struck by lightning, which some worshippers have regarded as a sign of God’s displeasure with evil in the World.

Early artists: Before the advent of photography, artists had to rely on their own observation or copy the work of earlier masters. Giorgione, in 'La Tempesta' (c. 1506–8), painted lightning in a moody sky that was innovative for its time and projected a sense of foreboding – the power of the gods..

Scientific beliefs: Science proved that lightning strikes were a natural weather phenomenon and could not be attributed to the work of a god. With this knowledge and in the spirit of Voltaire, Robert Louis Stevenson wrote 'Last Night We Had a Thunderstorm in Style' as a daring piece of mockery to those who feared the thunderbolts of Jupiter and the belief that thunder was the voice of God that boomed through the ages.

Last Night We Had a Thunderstorm in Style

Our God the Father fell down stairs,
The stark blue lightning went its flight the while,
The very rain you might have heard a mile,—
The strenuous faithful buckled to their prayers.

Robert Louis Stevenson, Last Night We Had a Thunderstorm in Style (1875)

Electricity: In 1832, Michael Faraday published his finding that electricity induced from a magnet, voltaic electricity produced by a battery, and static electricity are all the same. Lightning is a static discharge and today, it is believed the initial charge relates to the movement of ice particles within the turbulence of storm clouds.

The kite experiment: Benjamin Franklin grounded electricity from thunder clouds in 1752. Realising the dangers of using a metal rod, he instead utilised the conductivity of a wet hemp string attached to a kite. A house key was attached to the hemp string and connected to a Leyden jar. The kite was not actually struck by visible lightning, had it been, Franklin would probably have been killed. However, the thunder clouds above the kite were charged, and therefore, as he moved his hand near the key, he observed a spark, proving the electrical nature of lightning.

Lightning strikes: Lightning is spectacular and dangerous. The extreme heat of lightning will vaporise water within a tree, creating steam that can blow the tree apart. We recognise the powerful effect of the approach of a thunderstorm and the influence of an electric current on people and creatures. Around 2,000 people are killed worldwide by lightning strikes each year. Few people survive however, between 1942–77, a US park ranger was struck 7 times by lightning – Roy Sullivan survived all 7 strikes and is entered in the Guinness Book of Records as the human who has been struck the most by lightning. Another name associated with a lightning bolt is, of course, Harry Potter whose scar serves as a reminder that he survived the Killing Curse because his mother's love protected him. Lightning and storms set the scenes in fiction and movies, to capture and terrify the audience, for instance, Emily Brontë’s Wuthering Heights (1847) uses wild and rampant weather outside to connect the raging emotions of characters in her novel.

The substance, a 3–4 cm piece of fulgurite, was placed in a glass jar and covered with good quality vodka and sealed. The woman who found the stone wrote, 'I collected the fulgurite from the desert. A group of us went out riding to find them. We were near to Wickenburg, Arizona. We spotted them on horseback and then would jump off to collect them. The idea was to have a purpose while riding, rather than just drifting along. It's barren out there and then there are these fulgurites, some of which glisten a little in the light.' The sandy exteriors hide the treasure of the fragile fulgurite. As healing stones, they are described as possessing high and potent vibrations, the powerful energy of lightning itself.

The proving symptoms have little in common with the well-known remedy Silica, the product of slow precipitation of nodules of flint in limestone formations, and a lot in common with the themes of imponderables. Symptoms of Electricitas and Fulgarite are strikingly similar, relating specifically to the power of an electric current. In terms of homeopathic therapeutics, Caspari spoke highly of the healing powers of electricity. In the case of Fulgurite, the electricity of the stone manifested as a story of hot pressing speed and an intense excitement. There were patterns and vibrancy then a feeling of blocked up tension. The experience of sudden electricity was followed by a sense of being high and flying – the polar opposite of falling down. There was a loss of boundaries – an invasion and a sense of being exposed – with an overwhelming feeling of obliteration, violence and anger. A disconnection was felt and preceeded by a lull after a period of excitement, industry and intensity. A sadness and inevitability set in, until slowly the energy built again – the hot pressing, height and excitement that connected provers to the Earth, grounding them with sharp, stabbing pains – echoes of the antler-like electrical discharge of lightning strikes.

Imponderables in homeopathy: Lightning belongs to this group of remedies, potentised from energy sources, and include sunlight (Sol), moonlight (Luna), magnetism, Electricitas, X-ray, Ultrasound, Mobile phone, Positronium, radiation. Energy and power are forces with no material substance. When we anthropomorphise these forces we could feel invincible, unaffected or altered by anything. On the other hand, we might feel overwhelmed, held, crushed and overpowered by forces against which we have no defence. In the imponderables, there is energy, potential, power, transformation, destruction, production, being stronger than matter, penetrating matter, with access to everything, unrestricted by time and space, beyond matter and spiritual. The imponderables are a group apart, using 'energy' words rather than 'structure', and they express the experience of energy.

Power in imponderables: The imponderables have tremendous potential and power yet no substance. Keywords include, null, void, no worth, nothing, cancelled, revoked, invalid, insubstantial. A prover recorded this essence in a dream, 'I dream I am at a superhero academy. I have been training to be a great warrior or hero. I am about to graduate and we are planning a party. There are only 4 of us graduating as the others have all fallen by the wayside. There are 2 frames to the dream. In the first I am at college, in the second I am in a mystical land facing a nameless evil that is greater than I am. In this place there is great danger. There is betrayal and trickery. I am trying to make discoveries, find things out – superhero stuff – but I find myself hiding behind things and feeling wary. I am being hunted. My fellow superheroes are moving in loose formation across a great plain. As I watch I see them struck down and fall to the ground. I do not see what strikes them.' Energy, restricted by time and space, becomes matter (e=mc2) matter, substantial, something, real, recognised and valid. Power may be unrecognised, it may be unjust and regarded as unfair. Uncertainty, inconstancy and changeability with no certainty gives a sense that anything is possible; it can be this or that, duality, a wave or particle. It is power that penetrates and goes through anything, having access to everything, or the opposite, being overwhelmed and destroyed by powers beyond control. As one prover noted, 'There is too much power in this proving. It is too hot to handle. I cannot sit with it. I have to keep "discharging" the energy'. 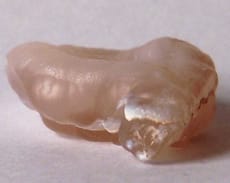 Lightning is a dramatic natural example of static discharge. The initial charge is thought to be associated with contact and separation between ice particles moving within the turbulence of storm clouds.