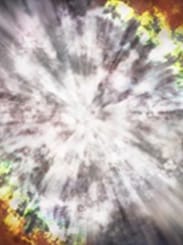 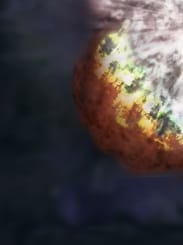 About Positronium
Positronium is a system consisting of an electron and an anti-particle a positron that is bound together into an exotic atom. An electron is a subatomic particle with a negative electric charge, they are part of the lepton particle family and generally thought to be elementary particles,  due to them not having any known componets or substructure. The electron has a mass that is approximately 1/1836 that of the proton.

A Positron or anti electron is the antiparticle or anti matter counter part of the electron. The positron has an electric charge of plus one, a spin of half and the same mass as an electron. Meaning that a low energy positron collides with a low energy electron, this is where annihilation occurs, resulting in two or more gamma ray photons. Positrons can also be generated by positron emission through weak interactions, or paired by production from an over enegertic photon by interacting with an atom in a material.

Source and Description
Positronium is a short lived hydrogen like atom composing of an electron and its anti particle (anti matter), a positron, that is bound together to form an exotic atom, arising as a positron and being slowed down in matter, and captured by an electron.

An Exotic atom is a normal atom by which one or more subatomic particles have been replaced by other particles with the same charge, these electrons may be replaced by other negatively charged particles such as muons or pions, however due to these substitute particles being unstable, exotic atoms have a very short life span. The exotic atom is specifically an onium, the sytem is unstable when the two particles annihilate each other to predominately produce gamma rays, this depends on the relative spin states. The orbit and energy levels of the two particles are similar to the hydrogenatom, but due to the reduced mass, the frequencies of the spectural lines are less than half of the corresponding hydrogen lines.

Antimatter as mentioned above is a material that is composed of antiparticles, which have the same mass as particles of ordinary matter but have opposite charges. When a collision happens between particles and anti particles this leads to the annihaltion, giving a rise to a variable proportions of intense photons (gamma rays), neutionos and less massive particle -anti particle pairs. The consequence for this annihaltion is the release of energy available for working proportional to the total matter and anti matter mass.

Positronium has two possible configurations that depend on the relative orientations of the spins from the electron and positron.  A singlet state with antiparallel spins is a para-positronium that has a lifetime of 125 picoseconds and deacys preferentially into two gamma rays of energy. Through the detectation of photons, allows for the reconsruction of the vertex fromthe decay and is used in the positron-emission tomography.  Para positronium will decay into any even number of photons. A triple state that has three parallel spins is ortho-positronium that has a lifetime span of 142.05 picoseconds and a leading decay of three gammas.

Positronium in the 2S state is metastable having a lifetime span of 1.1 picoseconds against annihilation. The positronium created is in such an excited state quickly cascades down to ground state, meaning that annihilation occurs more quickly.  The energy levels for poistronoum are caluated using the ‘Breit’ equation; the similiarities between hydrogen and positronium allows a rough estimate. In this approximation the energy levels are different due to different effective mass in the energy equation.  Thus the positronium reduced mass differs from the electron by a factor of two causing the energy level to be roughly half of what they are for the Hydrogen atom.

The lowest engery level for a positronium is -6.8 electron volts, causing the negative sign to imply a bound state. Positronium can also be considered by the two body Dirac equation, where two point particles with a coulomb interaction can be exactly separated resulting in ground state engery being obtained accurately using the finite element method of J Shertzer.

The exotic compounds of positronium are where moelcules of positronium hydribe can be made. It can also form cyanide and can form bonds of halogens or lithium. The natural occurrences in high energy states of positronium has been predicted as the dominant form of atomic matter in the universe in the future, if proton decay, which is the hypothetical form for radioactive decay where the proton decays into lighter subatomic particles, then it becomes a reality.

History
A Croatian scientist Stjepan Mohorovicic predicted the existence of positronium in an article publish in Astronomische Nachrichten in 1934, calling it an‘eletrum’. He also predicated spectra of positronium, predicating its existence in stars, because he suggested the possible identification of spectral lines of positronium in spectra stars, unfortunately he was unsuccessful as positroium lines were first identified in a lab by Canter in 1975, and in outer space spectra of Crab Nebula was discovered by McClintock in 1984.

Martin Deutsch at the Massachsetts Institute of Technology experimentally discovered it in 1951 where it became kown as positronium. There have been many subsequent experiements, which have precisely measured its properties and verified predications of quantum electrodynamics.  During this time ortho –positronium became a discrepancy and was persist for sometime, this fased out when further calucations and measurements resolved the conspiracy. Measurements were in error due to the lifetime measurement of unthermalised positronium, which had only been produced at a small rate. Leading to a yielded lifetime that was too long.

Modern science has shown that matter and the material world is just one side, if the world was made of normal matter, then we can equally think logically of a world composed of anti matter. Energy and matter manifest the same underlying entity, every particle has a corresponding antiparticle. Particles such as protons and neutrons make up ordinary matter while their anti –particles such as positrons, and anti protons make up anti matter. The existence of anti matter was ruled out in the univerise, because matter won in the battle of existence that occured 13.7 billion years ago in the ‘Big Bang’. The after effect was a cosmic microwave of background radiation, which was the first energy (light) formed in our universe as a result of mutal annihilation of matter and antimatter.

Medical
Positron emission tomography is a special type of camera and tracer (radioactive chemical) that looks at organs in the body.  The tracer collects in cells that are using lots of energy, with the tracer liquid put intravenously into a vein. The tracer moves throughout the body, where it collects in a specific organ or tissue. The tracer gives of tiny postivley charged positrons particles. The camera records the positrons, turning the recording into an image on the computer.

Folklore/ Mythology/ Culture
In folklore, religion and mythology there are expressions of phyiscal reality and the difference between good and evil. The feeling links to the relationship between matter and anti matter. This is described in Hindu literature by the Devas who govern heaven, who are opposed by the demonic Asuras.  Heaven is seen in Hinduism as not the final place but to be related to body. In Hindu cosmology above earthly planes are others of Bhuka loka, Swarga loka meaning Good Kingdom, classed has a heavenly paradise of pleasure.

This is where most of the Hindu Devas reside along with the King of Devas Indra.  A deva means heavenly divine; Deva is masculine where as Devi is related to the feminine equilavant. They are seen as ‘Gods’ or Heavenly beings’.  In early Vedic literature all supernatural beings were called Asuras, these were concepts that evolved from Ancient Indian literature, but by the late Vedic period these supernatural beings were referred to as Deva-Asuras. In hindusim the Devas represent the good and the Asuras the bad.

Asura was a mythlogical Lord in Indian text who would compete for power with the more benevolent devas. The lord was a powerful superhuman demigod with good and bad qualitites. They are seen as enemy of the gods or demons.  There was a cosmic struggle between the force of order and chaos; the deva supported the humans on earth. This conflict is described as the churning of ‘The ocean milk’ for treaures including Amritha, which gives strength and immortatlity. The battle between matter and anti matter is ongoing and appears to be conflict of beyond early universe as science as not confirmed the subsistence.

Cosmological theory suggests that the universe could of began with the same amounts of matter and anti matter, but during early universe this conection was broken for unknown reasons, where matter become the domiant one, its known in physics as the Baryon asymmetry problem.  If there were equal amounts of matter and antimatter in the early universe, the combined destruction would have caused a complete absence of any matter.

The physicist Stephen W Hawking noted in A Brief History of Time: “We now know that every particle has an antiparticle, with which it can annihilate. There could be whole antiworlds and antipeople made out of antiparticles. However, if you meet your antiself, don’t shake hands! You would both vanish in a great flash of light.”

Hompeathic uses
Anti- Matter the remedy was prepared by exposing a solution to gamma radition produced by annihalition of positronium, the exotic atom that contains ans electron an anti particle a positron. Positrons were produced by beta plus decay of sodium -22 that passed though a nitrogen gas cell to form positroniums. They came shooting out of the nitrogen, hitting a metal plate, where they were annihilated producing 511 keV of gamma radition, that irradtated  some ethanol. The remedy never did come into contact with anti–matter, only during the radiation from its decay. 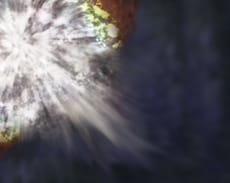 In folklore, religion and mythology there are expressions of phyiscal reality and the difference between good and evil. The feeling links to the relationship between matter and anti matter.