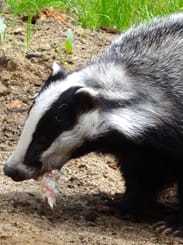 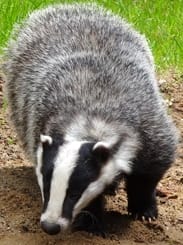 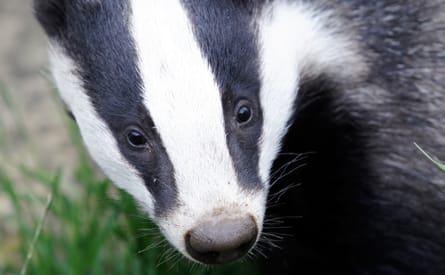 There be three Badgers on a mossy stone,
Beside a dark and covered way:
Each dreams himself a monarch on his throne,
And so they stay and stay.
Extract taken from Lewis Caroll's The Three Badgers (1889)

The patient’s core nature will powerfully manifest both territorial and family-oriented themes. This is a general feature of remedies from the Animal kingdom, so what is the special characteristic here? It is that Badger feels a traditionalist and is proud of it. They may be dictatorial, a feeling that arises from being 'just right'. They have a sense of entitlement, of possessing 'a level of quality above anyone else'. An image of the traditional patriarch comes to mind, who believes the old ways are the best ways. He feels himself to be 'a fair, magnanimous, benevolent overseer.' If a matriarch, then breasts, buttocks and nurturing are likely to be very important. She will feel contented hunkering down into a safe place, surrounded by her kids. 'Cuddling my children feels just great ... Want to snuggle up to them and smell them ... joking and wrestling and playing ...' Delight in nature and the natural world. Images of quicksand and tunnels. Sex is fun and so is shopping – materialistic pursuits and pleasures abound without generating too much guilt.  'I'm unperturbed by people's judgements, just feel utterly benevolent towards them ...' Vulnerability, paranoia, a sense that someone is sneaking up, fearing the future, and depression may also feature in this patient.

The badger is a member of the Mustelidae family that includes weasels, stoats and otters. Various subspecies are found in a band that stretches from almost the whole west coast of Europe, across Europe, Russia, Asia to the east coast of China. The subspecies used for the remedy, Meles meles is found throughout western Europe, except for the Iberian peninsular.

The skeletal structure of a badger's skull gives resistance to jaw dislocation and increases the strength of the jaw for biting. The animals have elongated heads with small ears, and black faces with white markings. The body is short and wide, grey on top with light-coloured underbellies; a light-coloured stripe runs from head to tail. An olden name for the badger is 'grey', suggestive of its mostly grey fur. The short legs, used for digging, are dark. The length of tail varies between species.

Badgers live in setts, networks of tunnels and chambers. Setts can be hundreds of years old, extensive and deep. Badgers are extremely territorial and some territories have been established many hundreds or even thousands of years ago, walked and marked each night by generations of badgers stretching back to long before the Romans or the Saxons arrived in Britain. They are also a hierarchical creature – one senior boar rules the sett and in the same way that he marks the territory, he marks other badgers with his musk and only those smelling of him are tolerated. Generally, only the ruling boar and senior sow will breed, though sometimes several sows, and in a large sett even a second boar, will breed. Many young boars are ejected from the sett and will wander quite far to find another group where they might defeat the ruling boar and take over the sett. Badgers that upset the social order can also be forced out of the sett and live in nearby satellite diggings until they are reaccepted.

Earthworms are the main food for badgers so they tend to live near pasture and open woodland where worms abound. They also eat insects, slugs and small vertebrates, and fruits and berries – particularly in the Autumn when they are plentiful – when the badger needs to put on fat for the Winter. British badgers do not hibernate but become less active in cold weather, venturing from the sett less often. Badgers do not like bright sunlight. They are primarily nocturnal because this is the time their prey – especially earthworms and insect larvae – are found on or near the surface. They are a tidy species – they create latrines to rid the sett of their waste and have also been known to bury their dead far from their kin.

Badgers are susceptible to lice, fleas and similar parasites. They moult every year and sleep in bedding of hay and other plant material that they change regularly, dragging the used bedding some distance from the sett. Like other mustelids, reproduction involves embryonic diapause. The eggs can be fertilised and then held in suspended animation until they are allowed to implant and develop in December. Sows can be sexually active soon after the cubs are born until the cold Winter sets in, in December. Cubs gestate for 2 months and are born in February. They remain deep in the sett for several months and in the early Summer, start to come out and explore around the sett, getting to know the whole territory by high Summer.

Badger cubs are playful. Adults are stubborn and tenacious. This partly accounts for why they are desirable as 'sporting' animals because they will fight until the end. Badgers can live for 15 years; an age of 19 years has been recorded in a captive animal. Many die in their first year but if they survive into a second Summer, road kill is the most common form of fatality.

Badger hair: Many years ago it was believed that badger hair could be used to ward off evil spirits, along with a bag made from the skin of a black cat, as revealed in the extract, 'A tuft of hair gotten from the head of a full-grown Brock is powerful enough to ward off all manner of witchcraft; these must be worn in a little bag made of cat's skin – a black cat – and tied about the neck when the moon be not more than 7 days old, and under that aspect when the planet Jupiter be mid-heaven at midnight.' Contrastingly, badgers were once considered a bad omen and a precursor for death.

German and Irish forlklore: In German folklore, badgers are depicted as lovers of harmony and peace whilst also remaining careful and suspicious. Similarly, in Irish folklore the badger is described as a shape-shifter, mysterious and rarely seen, fitting with its behaviour in the wild.

Food source: Badgers were a main meat source for Native Americans and European colonists. In some areas of the continent, badgers are still eaten.

Hunting: Badger-baiting was once a popular blood sport around the World. Dachshunds were bred for this purpose and sent down setts whilst baiters dug down. In the 18th century, the sport came to England, however, by the mid 19th century badger-baiting became less popular and was replaced by dog fighting. Badger-baiting was made illegal in 1835 and specifically outlawed in 1911, under the Protection of Animals Act. Under the Protection of Badgers Act (1992), it became an offence to kill, injure, take a badger or interfere with a sett unless under license. The Hunting Act (2004) banned fox hunters from blocking setts. Despite being illegal, the Sunday Times reported in February 2009, that illicit badger-baiting continues in the UK.

Literature: Kenneth Graham depicts Badger in Wind in the Willows (1908), as an unseen, rarely heard character. Often gruff but a dependable and fiercely loyal character, we see Badger take charge of the other animals and act as a knowledgeable leader. This fits with what we know about the badger's sociable habits and tendency to remain inconspicuous. In Beatrix Potter's The Tale of Mr. Tod (1912), Tommy Brock – a disagreeable badger – is described as being capable o ferocious violence, 'not nice in his habits' and 'waddles about at night digging things up'.

The Combe
The Combe was ever dark, ancient and dark.
Its mouth is stopped with brambles, thorn, and briar;
And no one scrambles over the sliding chalk
By beech and yew and perishing juniper
Down the half precipices of its sides, with roots
And rabbit holes for steps. The sun of Winter,
The moon of Summer, and all the singing birds
Except the missel-thrush that loves juniper,
Are quite shut out. But far more ancient and dark
The Combe looks since they killed the badger there,
Dug him out and gave him to the hounds,
That most ancient Briton of English beasts.

Pelts: Badger pelts have been used for hundred of years, to make shaving brushes. Today, hair generally comes from badger farms in China where cooperatives are licensed to hunt badgers. Hair of the European badger is used decoratively for some traditional Scottish items of clothing and that of the American badger as trim for a number of Native American garments and paintbrushes.

Disease: In Europe, to manage rabies, many badgers  were gased during the 1960s and 1970s. Badgers have also been blamed for the presence of bovine tuberculosis in the UK that resulted in proposed culls in certain areas. In 2013, there were protests about a cull of roughly 5,000 badgers in West Somerset and Gloucestershire. There is a correlation between the infection rates in badgers and cattle but no real evidence that badgers infect cattle. Given behaviour patterns and the nature of modern cattle husbandry it is possible that badgers are being infected by cattle rather than vice versa.

The proving revealed little of the badger's susceptibility to tuberculosis or the presence of a tubercular nature although symptoms of drifting in nature emerged. The persecution that has arisen from the tuberculosis crisis has a resonance to the long history of badger-digging and badger-baiting. Vulnerability, paranoia, fearing the future and a grey depression featured in the proving; also quicksand and tunnels.

Mammal remedies are indicated in people who are particularly influenced by the group or family, and are sensitive to the idea of whether they are being looked after or look after others. The badger is evocative of the English countryside and an English character. Badger in The Wind in The Willows sums up these qualities, as grumpy, and averse to company, a curmudgeon, but also loyal, kindly and fiercely defensive of his friends, tradition and historical values. The Joshis place Badger in Row 5, with issues of show, performance, exhibition-talents and expertise. They feel, 'incomplete if they have not achieved something different, extraordinary or special in their lifetime'.* Self-doubt and feelings of unworthiness are part of Badger's picture, along with delusions of being dirty. However, these themes were not apparent in the proving and instead, strong territorial attitudes and competition surfaced, with provers describing themselves as dictatorial and arrogant. In any group of mammal there is a clearly-defined hierarchy and so people needing these remedies are conscious of their position in society or within their family. Issues relating to territory were experienced by the provers as intrusion with irritability, intolerance, aggression and anger. There was even some growling!

Animal remedies have themes of libido and attractiveness which presented as sex, shamelessness, bawdy hilarity and consumerism in the proving. Badgers, as with other Mammal (and Bird) remedies have a developed sense of responsibility and desire to protect their young. Themes relating to these qualities – being alert, organised, confident and capable – emerged in the proving. In addition, a healthy mammal shows much affection for its young, playing with, washing and cuddling them. The need to have fun and rolling around on the floor surfaced in the proving as animal behaviour with experiences of joy, and horseplay and jesting with children. Badgers feed their young with milk excreted by the mammary glands, giving perhaps the closest bond between mother and offspring, of any creature. The uniqueness of the breast to mammals represents connection to mother and nurture, and a Mammal remedy may be indicated where there are physical problems regarding the breast or issues that the breast may represent. In health, the instinctive bonding and attachment between mother and child brings nurture, patience, socialisation, harmony and a capacity to love oneself and others.

Feel quite calm and organised which is not like me in the morning. Ready to go before my colleague and impatient to leave as don't want to be late, normally I'm the one being slow.