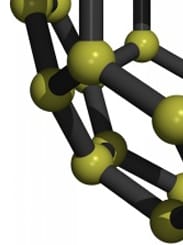 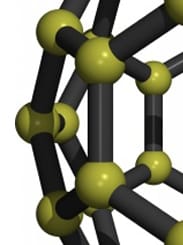 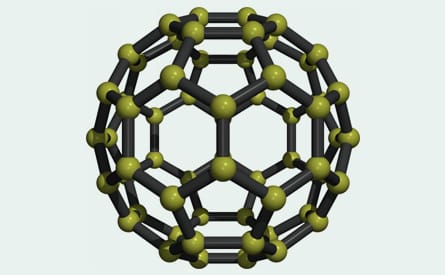 The issues facing patients needing Buckyballs have features in common with the carbon group plus the individualising feature of feeling vulnerable to attack; this is often of a sexual nature. There is an extra-terrestrial aspect that may give rise to visions of menacing, mycelium-like growth, and of course, bearing in mind Carbo fullerenum’s genesis, there is the overarching theme of greatest violence. The most memorable feature from the proving is fascination and fear of the colour red, and haemorrhage. It is likely that this remedy will find its place where individuals have experienced violence, and witnessed relentless destruction, where their very identity, as well as their body, is being threatened.

Fullerenes are hollow carbon molecules that take the form of football-shaped cage-like structures (carbon 60) and, by adding in rings of extra carbon atoms, can be coaxed into other shapes such as, ellipsoid (carbon 70) or tubular configurations (carbon nanotubes). Carbon 60 (C60) is composed of 60 carbon atoms joined together by single and double bonds that form a sphere of 12 pentagonal and 20 hexagonal faces. The C60 molecule is also known as buckminsterfullerene or the buckyball as a tribute to the American architect, engineer and inventor Buckminster Fuller, whose geodesic domes are constructed using the same structural principles. The C60 molecule is stable and strong and, although it can be persuaded to increase in size and elongate into tubes, none of these structures readily form electrovalent bonds.

The first fullerene: was discovered in 1985 by Sir Harold Kroto, Richard Smalley and Robert Curl at Rice University in the USA. Using a pulsed laser to vaporise graphite rods in an atmosphere of helium, the trio and their team managed to produce carbon clusters that are now commonly known as fullerenes. In 1996, the team received the Nobel Prize in Chemistry for this work. Carbon nanotubes were identified by Iijima Sumio of Japan (1991).

The substance in space: 'Give a mixture of carbon vapour, the right conditions for long enough, and fullerenes will eventually be the only molecules in it. That said, the formation of these ... is inhibited by hydrogen, and hydrogen makes up a huge percentage of the baryonic matter in the Universe. So for fullerenes to form in space, you need an environment which is lacking in hydrogen. An environment a bit like the planetary nebula Tc1 ... As far as they can tell, the central star in this nebula underwent a thermal pulse (supernova) a few thousand years ago, expelling the star's outer envelope. What remains is a hydrogen-poor environment in the middle of the star ... Seemingly, this makes for a prime formation site for fullerenes, which dominate the infrared spectra of the object ...'

The substance on Earth: The intriguing part of a fullerene is its electron-neutral space. Fullerenes, along with different molecules in the hollow-caged structures, that have survived the heat of entry into the atmosphere have been identified in meteorite debris. It has been hypothesised that only inside a fullerene might it be possible to 'house' positronium without it annihilating. Fullerenes are also found in graphite soot that may be collected under carbon arc lamps. This is because the very high temperature in the arc, plus the carbon-based electrodes, creates conditions that favour their formation.

The future: The remarkable qualities of fullerenes have made them central to many different areas of research. The spherical structure and the carbon-to-carbon bonds make them incredibly stable. As they are spherical they can be used as miniature ball bearings and make fantastic lubricants. The properties of nanotubes mean they are likely to be central to nanotechnology, electronics and engineering. Fullerenes are already revolutionising solar panels, and attaching other elements to fullerenes promises a range of further possibilities. They have been used in quantum experiments and are the largest objects to exist in waveform as well as particle form.

Medicinal uses: Fullerenes become a molecular sponge that can mop up free radicals and can be used to trap radicals generated during an allergic reaction so blocking inflammation. The antioxidant properties of fullerenes may be able to fight motor function decline in multiple sclerosis. Fullerenes are used for cytoprotective action against UVA irradiation and are more reliable than vitamin C in enabling prevention of skin injuries and aging.

The proving material was a sample of pure C60 obtained from a chemical supply company. The potentised substance buckyballs, like the noble gases, is pretty much chemically inert. For some provers there was an experience of calmness and absence of pain. It has many common carbon themes that include confusion, mental weakness, isolation and passivity.

All life on Earth is carbon-based and many mineral homeopathic remedies are carbon compounds. Calcarea carbonica, Baryta carbonica and Strontium carbonica are 3 well-known examples of inorganic remedies where the carbon element is present, added to which are multitudes of hydro-carbons (e.g. methane, ethane, propane, butane, etc.) and of course, sugars and fats, and all the carbohydrate-based molecules in all living systems. On its own, carbon is found in 3 forms in the original Hahnemannian materia medica, these being the pure graphites and the impure forms of Carbo vegetabilis and Carbo animalis. To these, Jeremy Sherr and Peter Tumminello added diamond, another pure form. C60 (Buckyballs) is the third allotrope of carbon.

Carbon group: There are 3 allotropes of carbon – graphite, diamond and fullerenes. [1] Graphite has a sea of delocalised electrons, making it an electrical conductor that is as good as many metals. The atoms are bonded in lattices of hexagons, much like layers of chicken wire. These large sheets are loosely bound together and can slide over each other, making it a superb lubricant. Individuals needing graphites – like sheets in the graphite crystal that slip and slide, lacking an anchor – experience instability. Such persons suffer from chronic indecision; any small and trifling thing is more than they can manage. Graphite is said to be the chronic of Pulsatilla! [2] Diamond is a graphite reorganised deep in the Earth’s crust under conditions of immense pressure and heat. It is reorganised in a giant lattice structure of 4 strong covalent bonds between the carbon atoms and, because all electrons are bonded, diamond is a non-conductor of electricity. It is strong, inflexible and very hard. Within diamond, the expression of the weak structure of graphite resides as a misty haze of anguish, despair, and suicidal feelings. Diamond immersion has the deepest despair, which Peter Tumminello describes as loss of the most precious; that is, of spiritual truth. The remedy diamond is famed to bring forth strength, hardness, clarity, sharpness, positivity and feminine power.[3] Fullerenes (C60 molecules) are by far the most stable and strong. They are the product of exploding stars. Patients needing fullerenes experience sensations of fullness and pressure. They may feel invincible but also threatened, as if they had become trapped and panicked in an end of the World situation, as if in a concentration or death camp where there is endless destruction and corruption.

Proving themes: related to paranoia, being vulnerable and open to attack. Provers felt naked and exposed, and excluded from The Group. There was lack of get up and go; an anaemia of the Spirit and associated calmness – 'I feel disconnected, as if I have no emotions. Not depressed, but complete absence of emotions, also of joy.' A star collapses and explodes (themes of being energised and busy dispersal and extravagance in the proving) when the core has exhausted its fuel (that is, there is no hydrogen left in the core to fuse into helium). 'I was thinking about explosions and bangs. The way my daughter was describing the pain I felt that she was going to explode! I was afraid she was going to burst, go bang!' As the star collapses, it quickly becomes denser and hotter until the interior pressures and temperature are great enough to start the process of fusing heavy elements into even heavier ones. The essence of a collapsing star is imprinted on the remedy picture with symptoms of red violence, heaviness, jagged pressure, oppression and a sense of closing in. One prover wrote, 'Sensation of something on my back grabbing hold of the back of my neck, has it's claws into me.' The fusion into iron is the inevitable end of the star's life cycle, when no further energy can be extracted. Iron is responsible for the redness and oxygen-carrying capacity of haemoglobin, and these iron-like qualities relate closely to the proving experiences of the colour red, blood, haemorrhage.

There is an extra-terrestrial aspect – time and space – in the proving which links in with visions of invasive growth and of course, bearing in mind the genesis of the shattering violence in a supernova, destruction. 'Feel thin, like I have lost the substance of me.' Perhaps unsurprisingly, Buckyballs shares many similarities with imponderable remedies, these being, destruction, dispersal, confusion, recklessness, extravagance and being energised. The violent themes, as well as being associated with supernovae events such as Tc1’s thermal pulse, can be related to the terrestrial creation of fullerenes in the extreme temperature of pulsed laser and plasma of a carbon arc. Destruction was experienced vividly in a dream of one prover, who wrote, 'Everything collapsing down on me, feeling crushed and then I escape, I am safe. In the dream, I am inside a reactor building, right inside the core. I am watching men demolishing the core with their hands and a pick axe! My first thought is danger, radiation. Then I realise the nuclear fuel is gone, may be it's OK. Need to escape, quickly. I turn my back and literally run through a thin brick wall to the outside and suddenly the whole structure is coming own, it's collapsing. It's coming down on me. I look around there is nothing. Where is X, concern for my friend X. I have some debris and dust on me, but I am alive.' Buckyballs should gain laurels in cases of unresolvable trauma, perhaps after witnessing bloody ferocity, where certainty has been vitiated by uncertainty, where the will for survival has been undermined, and where central themes in the case, concern violent actions, persecution and murder. For carbon to transform into C60, it has to undergo intense and violent transformation. In the case of a person, this kind of change could relate to breakdown and haemorrhaging hence the horrified reaction to the colour red associated with bleeding. However, once transformed into the new C60 state with the strong configuration of the molecule, a person could feel superhuman, super strong, and in possession of extra-terrestrial powers. A characteristic of the remedy is that the invulnerable structure of the molecule generated the opposite feeling of vulnerability in many of the provers, who felt invincible and powerful – 'I feel as if nothing bothers me today, I can see clearly what needs to be.' 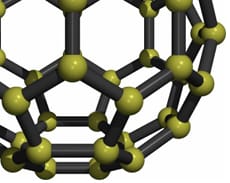 Buckyballs are a third, pure form of Carbon. They were recently discovered even though they have always been around and they have remarkable qualities that mean they will probably be central to many future technologies and may have been responsible for bringing primitive complex molecules to Earth. All these factors make it a substance with the promise of important therapeutic uses.