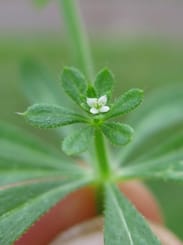 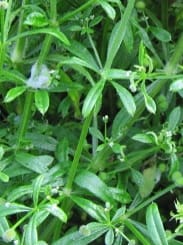 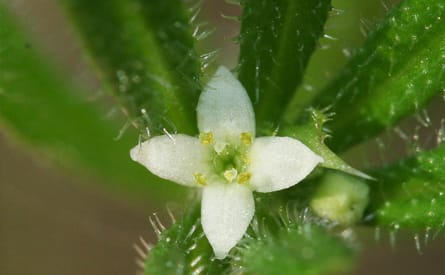 Source & Description
Goosegrass are annuals that have creeping stems that branch and grow along the ground and over other plants, attaching themselves with small hooked hairs, which grow from the stems and leaves of the plant. The stems of each plant can reach up to three feet or longer, and appear angular or square shaped, the leaves can be narrowly oblanceolate or linear, they leaves are arranged in groups of between six and eight. They have small star-shaped, white to greenish flowers that are clustered together in groups of two or three and emerge from early spring to summer. The species is native to a large region from Europe, North Africa, Asia from Britain and the Canary Islands to japan. In the United States, Australia, scattered locations in Africa and some oceanic islands, goose grass has become naturalised.  It can be found growing in hedgerows, wasteland and as a garden weed, it likes moist and grassy places on most types of soil.

Taxonomy
Chemical analysis of cleavers has revealed that the herb encloses chemicals, which include tannins, flavonoids, polyphenolic acids, iridoids, asperuloside and alkanes. The roots of this herb contain anthraquinones. It may be noted here that asperuloside contained by cleavers possesses a gentle purgative action.

Herbal/Medicinal Uses
Goosegrass was used traditionally to treat obesity. Culpeper says  'It is familiarly taken in broth to keep them lean and lank, that we apt to grow' and 'It is a good remedy in Spring, eaten (being first chopped small, and boiled well) in water-gruel, to cleanse the blood, and strengthen the liver, thereby to keep the body in good health, and fitting it for that change of season that is coming'.

It is harvested in May and June as it comes into flower and can be used fresh or dried for later use. It is used both internally and externally in the treatment of a wide range of ailments, including as a poultice for wounds, ulcers and many other skin problem and as a decoction for insomnia. The plant is often used as part of a spring tonic drink with other herbs.

Goosegrass is a valuable plant and a good cleansing remedy, it supports the lymphatic system to detoxify the body and can be used as a diuretic. The remedy is used to treat swollen lymph glands, tonsillitis, glandular fever and recurrent throat infections. In addition it can be used to treat eczema, psoriasis, arthritis and seborrhoea.

The leaves and stems of the plant can be cooked as a leaf vegetable. The numerous small hooks, which cover the plant and due to the clinging nature can, make it less palatable if eaten raw. Cleavers are in the same family as coffee. The fruits of the cleavers are often dried and roasted, and can be used as a coffee substitute which contains less caffeine. They can be used as an addition in vegetable soups.

It is said that using this plant as a vegetable has a slimming effect on the body.

History
Cleavers (goosegrass) was given this name because of its ability to cling to items such as clothing.

Pedanius Dioscorides a pharmacologist and botanist reported that the ancient Greek shepherds used the barbed stems, to make a rough sieve, which was used to strain milk. Later a Swedish botanist, physician and zoologist Carl Linnaeus reported the same usage as the ancient Greeks were doing to be happening in Sweden. Dioscorides also prescribed it for weariness.

Farmers encouraged the growth due to it being a favoured food for geese, hence the name ‘goosegrass’ . A poultices or wash that was made from goosegrass, had been traditionally used to treat a variety of skin ailments such as wounds or burns. It was used as a pulp to relieve poisonous bites and stings.

Gerard writes of Clivers as ‘A marvelous remedy for the bites of snakes, spiders and all venomous creatures”

Cleavers roots produce a rich red dye, which Native American Indians used to dye bones red. In addition they used the herb to treat gonorrhoea.   The women used the herb as a tonic, by rinsing their hair with an infusion of cleavers was said to make their hair grow strong and long. They also used the infusion in their baths to ensure they were successful in affairs of the heart which was said to make you successful in love. 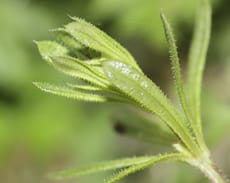 Goosegrass is a valuable plant and a good cleansing remedy, it supports the lymphatic system to detoxify the body and can be used as a diuretic. The remedy is used to treat swollen lymph glands, tonsillitis, glandular fever and recurrent throat infections. In addition, it can be used to treat eczema, psoriasis, arthritis and seborrhoea.