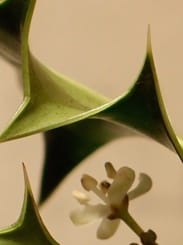 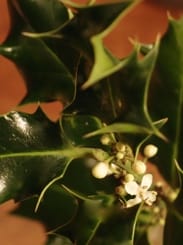 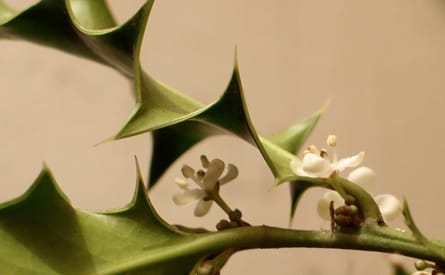 For those homeopaths familiar with Edward Bach’s flower essences Holly is very well know. When I started out in general practice, treating children and animals more frequently than adults, Holly was one of my mainstays alongside polycrests such as Nux vomica, Pulsatilla and Natrum mur. As you will doubtless know the indication for Holly rest upon it’s capacity to reconnect the sufferer with the light, turning hate to love, for instance when the subject is feeling jealous, envious, suspicious, bitter and angry. How astonishing then, that homeopathic Materia medica’s have so little to teach us.

A few years back I collected both male and female flowers, placing them under vodka in a medicine bottle. To this I added three partly crushed burrs. While crushing these I split the mortar. The pestle’s blows focused by the hard wood of the gall cracked the bowl. I had not taken the extreme density of the slow growing wood into account. The wood of Holly was used in joinery, cabinet making, engineering, the making of mathematical instruments, wood engraving and veneering, and was fashioned to provide bobbins for the cotton mills of Lancashire.

Below is the source substance the homeopathic proving was derived from 30c potency of burr wood and flowers:

Following the taking of the proving substace the provers did a meditation, during the meditation Mani had an image of someone coming into the room, a stranger. He asked them what they saw. ‘They see a green leaf in the middle of the room, it is large and it is shaped like a dragon. Strong and powerful. Dragons fly and they breath fire’. The mythical dragon is an interesting metorphor for Holly as they are depicted as brave, strong and defient, yet at the same time calm and carfree – they do as they please and have a sense of independence. Yet they are solitary creatures, living alone – detached. Often there is something precious they are protecting and that they will defend with anger and violence. These ideas are all key themes of the proving.

Provers ‘speaking as one’ arranged in the following themes:

Forceful, sure, brave and strong
Feeling stronger and not restricting myself, sure within myself, and also standing up for myself, indifference. Not accepting situations, sense of justice and appropriateness. A feeling of power and standing up for oneself - courageous, I was not bothered, could be domineering, bit forceful.

Indifferent and withdrawal
Detached, aloof, spaced out, leading to being misunderstood. Nothing mattered, nothing was making me angry or upset. Unable to communicate. Isolated, closed off, quite, can be happy and calm in isolated place or feel lonely and insignificant.

Sense of a struggle (in dreams as well as in reality).
Sharp pains; piercing, cutting.
The colour red. 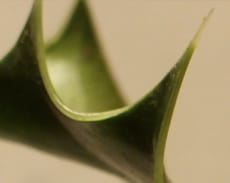 Calm, carefree and connected
Forceful, sure, brave and strong
Indifferent and withdrawal
Focus, energy and action
Sadness, depressed and down
Forgetful and lack of concentration
Exhausted, Tired and struggling
Angry and violent
War, shot and dead
Confused/disorientated, Vertigo and dizzy
Red and Blood
PhysicalsSex 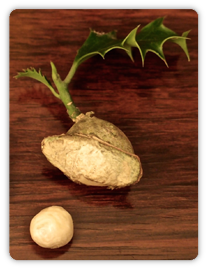 "Happiness is like those palaces in fairytales whose gates are guarded by dragons: We must fight in order to conquer it."