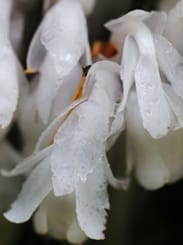 About the Ghost Pipe

A Plant Reclassified Into the Family Ericaceae.

For Monotropa patients going with the flow is paramount, while the sensation that sums up their pathology is blockage, manifesting as cramps, congestion, throbbing, jarring. When there is obstruction, nothing gets through. Sensations are of being constricted, pressurised, ready to burst, explosive. Intense waves of pain. Boundaries have been crossed, penetrated. Boundaries are leaking, the patient may feel hijacked, taken over by freeloaders and spongers. An important theme is of parasitism. Provers had many dreams. The most frequently occurring were of morphing from one state into another. Transvestites cross-dressing, being part animal, part human. Also dreams of autism. Patients may feel cut off, numb and isolated. Because a vital connection has been broken, they feel left out, rejected and alienated vs themes of fortification of boundaries, clear sense of direction, and ability to reconnect and become one with the Source. They feel tapped in, carried by the flow, or blocked, having the flow cut off, feeling isolated, numbed-out and alienated.

The plant is also known as ghost plant, Indian pipe or corpse plant. ghost pipe has no chlorophyll, it cannot photosynthesise. It obtains its nutrients from a fungus that in turn lives in association with neighbouring trees. Transport of nutrients occurs through the network of fungal hyphae. Many fungi and trees have this symbiotic relationship, known as a 'mycorrhizal' relationship. In mycorrhizal relationships, the tree provides the fungus with carbohydrates formed from photo-synthesis while the fungus provides the trees with various minerals, especially phosphates. Ghost pipe however, does not appear to give anything back to the fungus or the tree and instead takes nutrients from the fungus that it, the fungus, receives from the tree. Since the fungus has to take more nutrients from the tree to 'feed' both itself and the ghost pipe, Monotropa uniflora can be regarded as a parasite of both the fungus and the surrounding trees. In other words, pipe plants are parasitic on the symbiotic relationship of fungi and trees. Ghost pipe was originally classified into the family Monotropaceae, but after further research was reclassified to be included in the Ericaceae family of plants (heathers). Heathers, shrubs and trees thrive in acidic soil, and some plants in these groups, such as cranberry, blueberry, azalea and rhododendron, are known to have the same kind of relationship with mycorrhizal fungi.

Pipe plants are a rare perennial, found in Asia and throughout North America and parts of northern South America, growing in shady woods, in rich, moist soil, or soil composed of decayed wood and leaves, and near the base of trees. The whole plant is ivory-white in all its parts, and resembles frozen jelly. When handled it dissolves and melts away in the hands, almost like ice. The plant has single, short, waxy, white or pinkish stems that are 4–8 inches high and adorned with sessile, lanceolate, semi-transparent scaly bracts. The tip of each stem bears an odourless solitary bell-shaped flower with 4 or 5 petals; at first, before pollination, it is drooping, like a downward facing smoker's pipe. Their resemblance to a pipe has given rise to the names ghost pipe or pipe plant. The stems arise from May until October from a mass of dark fibrous, tangled roots that composed of fungus and plant, each having intimate connection with one another. The flowers are pollinated by bees and after pollination, the flower turns upwards and forms an oval seed capsule. When the fruit has matured, tiny seeds are dispersed by the wind. Once the seeds are released, the plant dries out and turns black and quickly shrivels.

Cherokee legend: Long ago, when selfishness first entered the World, people began quarrelling, first with their own families and tribal members, and then with other tribes. The chiefs of several tribes met together to try to solve the problem of quarrelling. They smoked a peace pipe together, while continuing to quarrel among themselves for the next 7 days and nights. In punishment for smoking the peace pipe before actually making peace, the Great Spirit turned the chiefs into grey flowers making them grow where relatives and friends had quarrelled.

Early 19th century: In 1821, William Hooker – founder of The Royal Botanic Gardens, Kew – and his son Joseph Hooker, hypothesised that ghost pipe could either be regarded as being parasitic on tree roots or, like fungi, absorbing nutrients from decomposed organic matter. In the early 1840s, Thomas Rylands learnt that the roots of ghost pipe were not associated with trees but rather to the cobweb-like hyphae of fungi instead.

Late 19th century: Franz Kamienski found that the hyphae were connected to the roots of trees as well as to ghost pipe, establishing a symbiosis between fungi and woody plants.

1960s: Eric Björkman and Steve Trudell showed that nutrients and carbohydrates flowed into ghost pipe from the mycorrhizal hyphae network thus demonstrating that these plants are parasitic on the symbiotic relationship of fungi and trees.

2005: Martin Bidartondo, at The Royal Botanic Gardens in Kew, released research findings on the ecology and evolution of symbioses between plants and fungi. DNA evidence compiled by Bidartondo showed that an ancestral plant mutated and eventually evolved into ghost pipe and other species of Monotropa. John Pastor in 2016, wrote in theclevermoose.com, 'There is a technical term for this sort of mutation in evolutionary theory, namely, “cheater”. A cheater is an individual with a mutation that decreases its reproductive fitness but which benefits from other individuals without that mutation. The white ancestors could not produce seeds on their own, but only if they obtained carbohydrates through the mycorrhizae connecting them with their green relatives. Any population can withstand some small burden of cheaters, but not much. The cheater strategy is probably one reason why ghost pipes are relatively rare.'

Emily Dickinson: The reclusive American poet, who dressed in white, has been compared to the ghostly plant that lives alone in the shaded wood. The flowers drew her attention and she once wrote, 'Did you ever know that a flower, once withered and freshened again, became an immortal flower, that is, that it rises again?' Her first book Poems, published posthumously in 1890, had an illustration of ghost pipe on the cover. The plant was known as her very favourite wild flower. In The Passion of Emily Dickinson (1992), Judith Farr writes, 'Toward the end of her life Mrs Todd (Emily’s brother’s long-term lover) painted her a picture of these flowers and she wrote back her thanks, “That without suspecting it you should send me the preferred flower of life, seems almost supernatural, and the sweet glee that I felt at meeting it, I could confide to none.”'

'Tis whiter than an Indian Pipe—
'Tis dimmer than a Lace—
No stature has it, like a Fog
When you approach the place—
Not any voice imply it here—
Or intimate it there—
A spirit—how doth it accost—
What function hath the Air?
This limitless Hyperbole
Each one of us shall be—
'Tis Drama—if Hypothesis
It be not Tragedy—

Medicinal uses: The ‘root’ is the part that herbalists use and it should be gathered between September and October. It is a tonic and sedative used for convulsions in children, epilepsy, chorea, spasmodic affections, febrile diseases, as a diaphoretic, for restlessness, pains, nervous irritability, acute anxiety and/or psychotic episodes, severe mental and emotional pain, as well as intense nerve pain. The plant has aspirin-like chemicals that no doubt account for its analgesic properties. The juice of the plant is used to treat ophthalmic inflammation, general inflammation, ulcers, and gonorrhoea.

When Misha first came across Monotropa in Vermont, USA, he was struck by its appearance – a ghostly apparition of white shrouds on a leafy floor of dim woodland. Closer inspection revealed a translucent flower and stem emerging from the ground. He picked a few and was amazed by the plants' lack of density, which collapsed in his hands as if they had melted. He placed all that was above ground in a bottle and here the plants quickly blackened. At home, a few hours later, he added vodka for preservation, ready for later potentisation.

Themes emerged in the proving that related to vulnerable boundaries, loss of control, penetration, loss of direction, disconnection, confusion in finding the right words, and not belonging to the family or group. These oppose other themes of fortification of boundaries, sense of direction, connection, clarity, confrontation and mental tension leading to resolution. The proving revealed another strand running alongside that of Ericaceae, relating to ghost pipe's mycorrhizal relationship – the fungal theme of invasion and expansion, as well as issues such as dependence on water, decomposition, and dissolution. Sankaran describes sensations of fungi as invading, burrowing, digging, excoriating and eroding. Dreams of underground tubes and tunnels, basements, burrowing, up and down, intense waves, rising high and diving deep, are consistent Monotropa proving themes. Michal Yakir assigns Monotropa to Column 4 on her table, which relates to the group or family. She writes, 'The flow is blocked: concept of flow being obstructed or being detached from the Source. Obstructive dreams/delusions included cars driving down narrow roads, barricades, and traffic jams. One can move only in secretive or underground ways.' Provers spoke of safety in the family or the 'Source', and the anxiety of its absence – or a desire to leave this 'nest' and be on one's own – or being obstructed and feeling left out. The consensus in the proving experience was that when it is possible to push through these dark, lurking unpleasant truths and 'bring them up into the light', one can reconnect and become one again with the Source. Scholten describes Ericales as feeling they are tolerated and not really accepted anymore, often living in poor conditions, as they do not need very much; they may long for recognition and compliments, and in the end can become bitter, seeing themselves as unimportant and offering themselves for others. This echoes Edward Bach’s indications for Heather, 'For loneliness, those who are always seeking companionship of anyone who may be available, as if they find it necessary to discuss their own affairs with others'. As ghost pipe relies soley on its hosts for nutrition, the expressions described by Bach seem to be amplified.

AIDS is the prominent miasm because the boundary issue is paramount. For ghost pipe to survive it needs to become confluent (lose boundaries) with the mycelium of fungus, that in turn becomes confluent with tree roots for its nutrition. The structure above ground melts away when handled – it loses its boundary – hence the plant's other name, wax plant. The feeling of having no boundaries between oneself and the World – being vulnerable, naked and exposed – is perhaps the most basic feeling of the AIDS nosode. Ghost pipe, flows freely without resistance. It is an attuned calm flow, which is connected to Source. However, when disconnected – through obstruction or detachment – ghost pipe, like the AIDS nosode, becomes weak and separate. This experience was recorded by one prover as, 'I felt like a complete universe was contained within me and that everything external to me was cut off, as though a bubble surrounded me'. 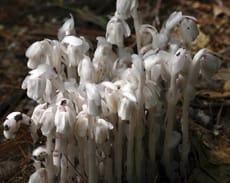 Imagine drifting in a tube. You are flowing freely without resistance. The direction of travel is set. There is nothing to resist, just to relax and go with the flow. This state of connectedness is so perfect that neither fear nor anxiety arise.