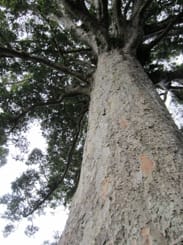 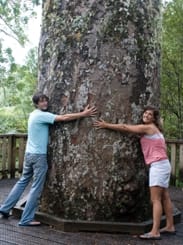 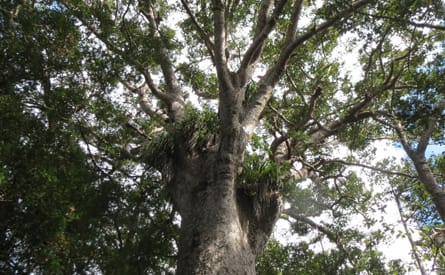 About the Kauri Tree

Agathis Australis is commonly known by its Maori name ‘Kauri’, it belongs to the ancient conifer family Araucariaceae with Agathis being one of three still existing in the genus. Kauri appeared about 20 million years ago.   The Kauri tree has the largest volume to any other tree in New Zealand and can stand at 50m tall. It holds the prominent layer of the forests canopy. The trunk of a full grown Kauri has a greyish bark, with Kauri gum oozing from the bark of a mature tree. Its leaves are described as being very narrow and leathery turning from a bronze colour when young to a bright green as they mature.

These Kauri forests are one of the most ancient in the world, with antecedents of Kauri appearing during the Jurassic period. Kauri is known for being an abundant tree in many forests in New Zealand, as a result of this they are generally known has Kauri forests. In northern climates where the weather is warmer Kauri forests have a higher species richness, than their counterparts in the south.

Source & Description
A young Kauri plant will grow straight upwards forming a narrow cone, with branches forming along the length of the trunk, as the plant gains its height then the lower remaining branches are shed, stopping the prevention of vines climbing the tree. When the tree has reached full maturity its top branches cover any existing native trees by dominating the forest canopy. It has both male and female cones, male cones fall once they have released their pollen in spring, in addition to female cones which ripen after three years of growth releasing the seeds which are dispersed by the wind.

The Kauri defends its self from parasitic plants by flaking its bark, this forms a layer at the base of the trunk. This can reach up to two metres in height and they are renowned for forming patches around the mixed forest. Their leaves grow between three and seven centimetres long being one centimetre in width, with a tough leathery texture.

It has a unique relationship with the soil, feeding the organic litter near the surface of the soil through fine root hairs, where the soil is composed of organic matter from the falling leaves and branches, in addition to dead trees that cover the ground floor which are constantly undergoing decomposition. The Kauri has much greater acidic levels than other trees and as it decays the acidic compounds become liberated, these acidic molecules pass through the soil layers helped by rainfall, and release other nutrients trapped in the clay.

The Kauri is competitive and will fight for its survival by depriving the other species of nutrients. Due to the slope of the land the water from the hill sides flows downwards taking with it the nutrients in the soil, making the soil at the base higher and richer in content. As the nutrients leached are replaced, the Kauri is less able to inhibit the growth from other species. This is shown in the Waipoua forest where there is a higher abundances of Kauri trees on the ridge crest, with its competitors on the lower elevations.

History
The Kauri tree, Agathis australis, is New Zealand’s largest and most famous native tree. The Kauri is a type of conifer tree which grows in the subtropical northern part. Ancestors of the Kauri first appeared in the Jurassic Period 190 – 135 million years ago. The Kauri’s cone bearing hardwood forests are among the most ancient in the world.

The Kauri is famous for its interactions with the soil, having a separate regeneration strategy to other species of tree. It demands much more light and requires larger gaps to regenerate, they must remain alive long enough for a larger disturbance to occur allowing them the light that they need.

In areas of the forest that have been damaged or destroyed through acts of human nature such as logging, the Kauri seedlings are able to regenerate easily because of increased sunlight and their stronger resistance to wind and frosts. Having the prominent place at the emergent layer of the canopy they are exposed to the effects from the weather, the smaller trees which dominate the main canopy are sheltered by the emergent trees above. If the Kauri tree is left in open areas without any protection then they would be far less able to regenerate. When the disturbance becomes severe enough to warrant regeneration the Kauri tree will do this on mass, producing a regeneration of trees of a similar age allowing researchers to predict when and where these disturbances have occurred. The presence of the Kauri tree will indicate a specific area which may be prone to disturbances.

In the absence of disturbance the Kauri tree will become rare as it is excluded by its competitors. They become randomly distributed in age, as each tree dyes off at different points in time causing regeneration to become rare. Over the course of thousands of years this leads to various regeneration strategies where the Kauri tree will retreat uphill during the periods of calm, but will take over and dominate lower areas when disturbances occur.

In 1820 logging began and decreased the number of Kauri trees considerably. It was estimated that before 1840 the Kauri forests of the north occupied at least 12, 000 square kilometres but by 1950 this had fallen dramatically to 1,400 square kilometres.

Kauri trees were used in the past for wood construction due to their size and strength, it was used in ship building, particularly for masts because of its parallel grain but also used for the building of the deck and hull of the ship. The stump of the tree was seen for his beauty and was sought after as an ornamental feature, in addition to being used for making furniture as it was both decorative and strong.  It was used in fabrication for cisterns, barrels, bridges constructional material, fences, moulds for metal forges, larger rollers for the textile industry, railway sleepers and braces for mines and tunnels. It was considered to be a much sought after and first rate timber. During the late 19th century and early 20th century Kauri gum that had been semi-fossilised and turned into a resin was used as a varnish and become the focus of industry.

However today the Kauri has the second highest total carbon content of ground biomass and dead biomass of mature Kauri forests. With it being estimated that the total carbon capture is around 1000 tonnes per hectare.

Kauri trees are however facing a new threat from a fungus type disease called Kauri dieback.  There is no known cure, however its prevention can be helped by cleaning boots and equipment, and by avoiding the Kauri tree roots as any movement of soil from around the roots of the tree can spread the disease.

Mythology
Tane Mahuta in Mario mythology is the god of forests and birds he is the son of Raginui and Paptunanuku the sky father and the earth mother. Tane and his siblings became frustrated about the cramped space between their parents, Tu one of the siblings prospoed that they should kill their parents, but Tane strongly disagreed and suggested that it would be better to separate them, by sending their father into the sky and to leave their mother below so she could care for them. Tane and his brother tried there up most to separate their parents, after several failed attempts Tane lies on his back and pushes with the force of his legs his parents apart. With success their father rises high into the heavens.

The god of storms and wind Tawhirimatea was furious that the parents had been separated and joined his father in the sky. Punishing the earth and sea with violent storms, and then starting an attack on the forests of Tane by snapping the trunks of the trees, causing them to shatter and fall to the ground where they became a source for decay and insect food. Tangatoa god of the sea fled the attacks. Iikrate the father of fish and Tu Te Wehirmatea the ancestor of reptiles were terrified by Tawhirimatea fury, so they sent the fish fleeing into the sea and the reptiles escaped into the forest. Tanagra resented Tane for hiding his children. Tane provided the descendants of Tumatauenga with canoes, fishhooks and nets to catch the descendants of Tangaroa. Tangaroa retaliated and over turned the canoes sending a flash flood that swept through the land, trees and houses. As a result of this myth and Tane separating his parents the sky father and earth mother by letting light into the world sees the Trees in the forests as holding apart the earth and sky, so light can come in.

Legends say that Tane was trying to find himself a wife, but he only found insects, birds and plants. One wife was Rangahore, but she was abandoned by Tane as she had only given birth to a stone. He then made a women by moulding her from soil.

Due to these myths the forest is seen as a vital for life and Tane being the god of the forest, was seen as very important in tribal traditions.

Culture
In the Northland is Tane Mahuta and other ancients of the mighty Kauri tree. Tane Mahuta is the Lord of the Forest and is also known as the spiritual God, with the tree being estimated at 2000 years old and is the tallest Kauri tree in the world. Te Matua Ngahere is known as the Father of the Forest and is estimated at 3000 years old. He is the oldest and widest Kauri tree in the world.

Then we have the Four Sisters knowing that Kauri trees normal grow alone, but these four separate trees are believed to come from four seeds from the same tree and have co-existed for about 500 years. These trees are evenly spaced, with very slender trunks and the branches at the top of them all reach outwards. The Yakas is the seventh largest Kauri tree and is named after Nicholas Yakas, a gum digger who had discovered the tree. Cathedral Grove is located on the tracks to The Yakas this is beautiful place where Kauri trees stand with absolute peace except for the sound of bird song.

The Karui gum was said to be scraped down to produce a powder, this was then mixed with olive oil and applied to burns. The Kauri was also used to burn, and the soot produced was used for tattooing and when added with shark oil produced a black paint that was used to paint the canoes by Maori in the north. 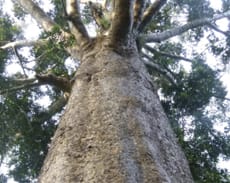 There is an incredible amount of water in the remedy. There are dreams of walking on water, of people being in boats, of swimming pools being iced over, of clipper ships, of swimming, beaches, of wasps drowning, dreams of waterfalls, sensations of her uterus being grasped, of trickling sensations running down the legs, of incredible thirst, the smell of water, of everlasting urination, the longest urination people had ever had, of running noses.

The stump of the tree was seen for his beauty and was sought after as an ornamental feature, in addition to being used for making furniture as it was both decorative and strong