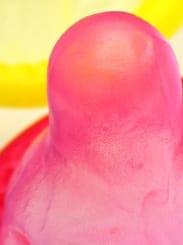 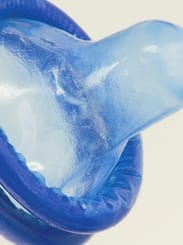 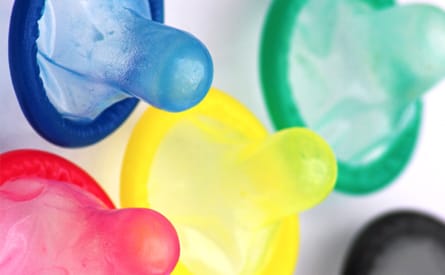 Introduction
A condom acts as a barrier device that is used during sexual intercourse to reduce the risk of pregnancy and sexually transmitted infections. They are made from latex but can also be made from other materials such as polyurethane, polyisoprene and lambs intestine. For the use in birth control male condoms are chosen, as they are inexpensive, and have no side effects in addition to offering protection against sexually transmitted diseases. They have been used for over 400 years since the 19th century, and are one of the most popular forms of contraception.

Source and Description
The majority of condoms have a reservoir tip, coming in different sizes from oversized to snug, with a tight ring at the base that forms a seal. Natural Latex has elasticated properties, and can be stretched in excess before breaking. Natural latex is a milky fluid found in 10% of all flowering plants. Its consistent of proteins, alkaloids, starches, sugars, oils, tannis, resins and gum that change to a solid or semi-solid state, when they have been exposed to air. In many plants latex is seen, as white but can also be yellow and orange. The term latex has been used to describe the fluid substance for plants since the 17th century and served the plant in its protection against insects.

Every latex condom is tested for holes and electric current. A portion of each batch of condoms sold is subject to a water leak and air burst testing.  Latex does have drawbacks and can be damaged by oil-based substances; contact causes breakages, increasing the likely hood for it to slip of due to the reduction in elasticity.

Medical
The effectiveness of condoms depends on the knowledge and consistency of the person applying it. As above they are highly recommended for the prevention of STI’s, and have shown a reduction in infection rates, it is effective in reducing the transmission of organisms that cause AIDS, genital herpes, cervical cancer, genital warts, syphilis, chlamydia, gonorrhoea.  The 2000 National Health Institute states that the consistent use of latex condoms reduces the risk of HIV/AIDS by approximately 85% when used correctly. In addition, it shared its findings that the uses of condoms can reduce the risk of gonorrhoea significantly for men. In a 2006 study shares the correct and consistent use of condoms can reduce the risk of human papillomavirus in women by 70%.

Although highly recommended and used worldwide the condom can have causes of failure, they can slip off after sexual intercourse and break due to in correct application or physical damage. If the latex is past it expiration date it can degrade causing it to break or slip.

Latex can have adverse side affects causing allergic reactions to those people who are unaware of an allergy to it, causing skin irritation.  Those with severe allergic reaction to latex and by using latex condoms, they are potentially putting themselves in a life threatening condition.

History
The use of condoms before the 19thcentury is highly debated by archaeologists and historians. In Egypt, Greece and Rome the protection against pregnancy was seen as the women’s responsibility. During the 15thcentury in Asia the use of glans condoms is recorded. Condoms used for contraception were only known by those from upper classes. In China glans condoms were made from oiled silk paper or lamb intestines, whilst in Japan they were made form tortoise shell or animal horn.

In Italy during the 16th century Gabriele Falloppio wrote about syphilis in a treatise. The earliest documented strain, causing severe symptoms and often death a few months after contracting the disease was an outbreak in Europe in the 1490’s. Falloppio treatise is the earliest description of condom use, describing a linen sheath that was soaked in a chemical solution being allowed to dry before it could be used. The use of coverings to protect from disease is described in a variety of literature throughout Europe.  These coverings were initially used as devices to prevent birth control, rather than disease.  In 1605 the theological publication ‘De Iustitia et Iure’ condemned the use as immoral. During Renaissance times condoms were made from intestines and bladder, whilst during the late 16th century the Dutch introduced fine leather condoms to Japan.

There was some controversy in the 18th century as condom use was opposed in some religious, legal and medical circles due to the reduction and likelihood of pregnancy. However, the condom market grew and was made available in a variety of sizes and qualities made from linen treated with chemicals or skin. They were sold in pubs, barbershops, markets and chemist in Europe and Russia. This spread to America, but they were generally used by middle and upper classes because of their sheer expense and lack of sex education.

Charles Goodyear discovered a way of processing natural rubber, that was too stiff when cold and became too soft when warm, that made it elastic, they could be stretched and did not tear easily.  He discovered the rubber vulcanization in 1844 after ten years of researching he produced the first rubber condom.  They were manufactured by wrapping the strips of raw rubber around shaped moulds that were then dipped in a chemical solution to cure the rubber.

When the 19th century arrived contraceptives were offered to the poorer classes.  There were mixed views, some preferred other methods of birth control, while feminists wanted women to be in control of their birth control methods and strongly disapproved of male controlled methods. The expense, and the unreliability of condoms became a debatable discussion, however it was discussed that condoms were a good option for some as this was the only contraceptive that also protected from disease.

During this time many countries passed laws on the impeding manufacturing and promotion of contraceptives. Although these restrictions were in place, travelling lecturers and newspaper advertisements, using euphemisms where such ads were illegal. While in America and Europe instructions on how to make your own condom, were given out.

American rates of sexually transmitted disease skyrocketed; the causes were blamed on the ignorance of presentation methods.

In 1912 a polish inventor produced a new manufacturing technique by dipping glass moulds into a rubber solution, this required adding additional gasoline or benzene to turn the rubber to a liquid. By 1920 latex rubber suspended in water was invented and required less labour to produce.

The German military was the first to promote the use of condoms amongst their soldiers. During WWI the USA and Britain were the only countries that had soldiers in Europe who did not provide condoms or promote their use. Even after the First World War their remained social and legal obstacles to condom use across the US and Europe.

In 1920 the Church of England Lambeth conference condemned all ‘unnatural means of conception avoidance’. The Bishop of London at the time Arthur Winnington-Ingram complained about the number of discarded condoms.  During 1930 legal restrictions on condoms began to be relaxed, but in the depression condom lines by schmid gained in popularity. They still used the cement dipping process, which had advantages over the latex variety.

Condom sales continued to increase and many Americans of a reproductive age relied on them, in Britain many married couples relied on them. The US pushed for condom use in developing countries to solve the world population process.  Quality regulations tightened and legal barriers of condom use were removed. The increase in demand and greater social acceptance led to condoms being sold in a variety of settings.

Folklore
It is said that in popular tradition the invention and naming of the condom was attributed to Dr. Condom, who was at the court of Kings Charles II in the 1600’s, he was alarmed by the number offspring that Charles had. There is no proven name for the word condom however the Latin name ‘condus’ meaning receptacle as been used, and speculation continued with the use of an Italian word ‘guantone’ meaning glove.

Mythology
The uses of Condoms in history for the prevention of syphilis and unwanted pregnancy, and the shame associated with them are paramount in its history.  They form part of a cultural history based on shame and fear among sexual affiliations and social ethics.

The interpretations of myths consider the condom as a protective strategy. The controversy can be found in the legend of Minos and Pasiphae; Minos is remembered as not sacrificing a bull sent to him from Poseidon. Poseidon took his rage by inflicting Pasiphae with an irresistible passion for the bull and after wooing she conceived the monstrous Minotaur.  Having eight children Mino and Pasiphae were seen as quite prolific. Mino had five children of his own and a mistress, causing his envious wife to be enraged. She put a curse on Mino so that serpents devoured all women with whom he made love to. The story suggests that sexual infections and disease were an adequate punishment.  This shows today in the stigma and judgement placed on people with sexual transmitted infections.

The Goddess Procris wanted Minos as a lover she was said to provide Minos with a cure. Unaware of the actual cure, the myth suggests that she slipped the bladder of a goat into the vagina of a woman and into this bladder Minos cast off his serpent.  From this the uses of animal bladders were used and it was thought to protect women against possible pregnancy and infection.

Culture
Cultural attitudes towards the use of condoms can vary greatly around the world, and can be either conservative to extremely liberal. However, places where condoms are misunderstood or looked upon, means their use is directly affected. In less developed countries there is a misperception on the use of condoms and how they can protect from sexual transmitted diseases. There are some concerns about the number of women in more traditional times that feel uncomfortable in asking their partners to use them.

Risk behaviours and the choice to not use condoms are in every country and are influenced by social, structural and cultural factors. It s clear that assumptions and what are cultural norms about the relations of men and women do influence the decision on whether they use condoms.

They are seen to significantly reduce the risk of HIV/AIDS a disease that can have devastating effects.  However, promoting them in some cultures is proving very difficult, through cultural issues about expectations, gender inequality and religious views on fidelity

In Roman Catholic culture they oppose of any sexual acts outside of marriage. Protection against STIs is currently a topic of debate and as not been addressed. There is a belief that the Catholic Church should support the use of condoms to prevent such diseases like Aids.

In the African continent, some Muslim and Catholic Clerics prevent condom promotion because they feel that the sperm is being wasted. It is looked upon with high importance in reproduction, it is said to also have beneficial health effects. The belief is that respectable women should not use condoms. 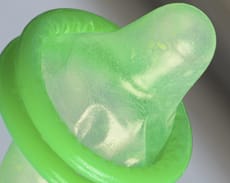 Latex is collected by making a cut in the bark of the tree. The diagonal cut leads into a bowl where the latex is collected. As the latex dries the cut heals up and it has to be extended downwards on a daily basis. When it reaches the ground the tree is left to heal and some time later a new cut is made.