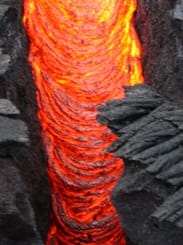 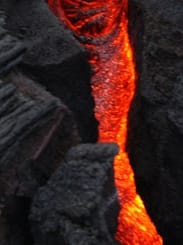 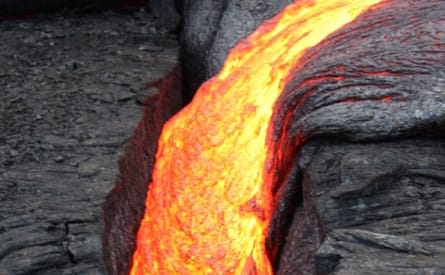 Lava is made of molten rock this means that a physical process has taken place, resulting in a phased transition of the substance from a solid to a liquid. It is expelled from a volcano during an eruption, and after cooling a rock is produced after solidification, this is also known as lava. Molten rock is formed in some planets such as earth and in satellites. The heat source which melts the rock within earth is known as geothermal energy. This is generated and stored in the earth, and is determined by the temperature of matter. Geothermal energy from the earth’s crust originates from the original formation of the planet from the radioactive decay from materials.

When the lava first erupts from a vent it is produced as a liquid, with temperatures from 700 to 1200 degrees. The lava flow is the outpouring of lava which is created after a non-explosive effusive eruption. When the lava stops flowing it solidifies to form igneous rock. The lava can flow great distances before it cools and solidifies, this is due its shear thinning and thixotropic properties. These eruptions can produce a mixture of volcanic ash and other fragments such as tephra.

Source & Description
Almost all lava is made from the earth’s crust and is dominated by silicate minerals, these are rock forming minerals which are classified based on their structure of the silicate group that contains different ratios of silicon and oxygen. Silicate lava is igneous rock that forms from lava flow and has three chemical forms felsic, intermediate, and mafic. Due to the chemistry of lava it can correlate with magma temperature, viscosity and eruption.

Felsic Lava is associated with pyroclastic deposits, with the lava flows being extremely sticky, fragmenting as they are being forced out. The high stickiness and strength stem from their chemistry, where they are high in silica, aluminium, potassium and calcium generates a polymerized liquid. The magmas can erupt at temperatures as low as 650 to 750 degrees.

Intermediate Lava is lower in aluminium and silica, but is much richer in magnesium and iron. This intermediate lava form site domes, in addition to block lavas and will occur on steep composite volcanoes. As they are poorer in aluminium and silica, they are commonly hotter and tend to be less viscous. These temperatures destroy polymerized bonds within magma, promoting more fluid and the tendency to form phenocrysts.

Ultramafic lava is high magnesium magmas that form boninite taking composition and temperatures of eruptions to the extreme, where they can erupt at temperature of 1,600 degrees. At this temperature there are no polymerization of mineral compounds.

The mantle of the earth’s crust is constantly confecting due to the heat from the planets interior. Mafic Magma is formed within the earth, when a portion of earth’s mantle is melted. It can be melted by three methods, adding heat to the mantle, changing its composition or by decreasing pressure.

Mafic Lava or as we know from the proving remedy as Basaltic lava, is so abundant due to it being the product of melting mantle, making up the majority of the earth’s volume. It is high in ferromagnesium content and will erupt at temperatures in the excess of 950 degrees. It is high in iron and magnesium and is lower in aluminium and silica, reducing the degree of polymerization within the melt. Due to its exceedingly high temperatures viscosities are low. This low degree of polymerization and high temperature favours a chemical diffusion, making it common to see a well formed large phenocrysts within mafic lavas.

Basalt lavas produce low shield volcanoes or flood basalt which is the result of a giant volcanic eruption or a series of eruptions which coats large stretches of land or the ocean floor. Basalt lava is thick especially on a low slope because it may inflate by the supply of lava beneath a solidified crust.  Most basalt lavas are pahoehoe types this means they are smooth unbroken lava rather than block lavas.

Basalt is an extrusive igneous rock that is formed from rapid cooling of basaltic lava that has been exposed near the surface of a planet or the moon. It is the most common volcanic rock on earth and being a component of the ocean crust. It is defined from its mineral content and texture, it is a grey to black in colour. Basaltic rocks colour varies due to regional geochemical processes from weathering and high concentrations of plagioclase.  The iron rich minerals oxidise rapidly in water and air. It has a fine grained mineral texture, from the molten rock cooling to quickly cause larger mineral crystals to be formed.

The shape, structure and textured of basalt depends on how and where it has erupted whether being in the sea, in an explosive cinder eruption or the most common being a creeping pahoehoe lava flow. The composition of lava determines its behaviour more so than the temperature of the eruption. The viscosity of the lava is vital as it determines how the lava will react and behave. Lava flows are enormously destructive to anything in their path.

History
On earth most basalt magmas have been formed from decompression melting of the mantle.  Basalt commonly erupts on Lo which is the third largest moon of Jupiter, also forming on the moon, Mars and Venus.  Its crustal portions of the oceanic tectonic plates are predominantly basalt that are produced from the upwelling mantle below the ocean ridges.

Basalt is one of the most common rock types in the world, and has a large igneous province. The most common occurrences are on the ocean floor, which is mostly made up from basalt.  Whilst above you will find it in hotspot islands and around volcanic arcs, with the largest volumes of basalt on land being the continental flood of it.

The dark areas on the earth’s moon are the plains of flood basaltic lava flows where these rocks were sampled by the America Apollo Program. Basalts are important within the metamorphic belts where they provide vital information on the conditions of metamorphism within the belt.

Basaltic Lava is characterized by a rough or rubbly surface that is composed from broken lava blocks called ‘clinker’. This Hawaiian word was introduced as a technical geology term by Clarence Dutton.

Basalt is used in construction either as building blocks or for ground work such as cobblestones, in addition to being used to make statues. When heating and extruding basalt yields stone and wool are said to be a good thermal insulator.

Carbon sequestration in basalt has been studied, to be a means of removing carbon dioxide that is produced by human industrialization from the atmosphere. With basalts deposits under water they have aided to the benefit of water by serving as barrier to the re- release of CO2 in the atmosphere.

Mythology/ Folklore
In Ancient roman religion and myths ‘Vulcan’ is the God of fire which includes the fire from volcanoes, the word Volcano derives from the term ‘Vulcan’. He belonged to the most ancient stage of roman religion ‘Varro’ who was an ancient roman scholar and writer. His connections came from the religious ideas concerning fire and associated him to destructiveness and the fertilising powers of fire. His cult is located outside the boundaries of the original city of Rome to avoid the risk of the fires.  His power is seen as useful when it comes to protecting the city from enemies.

In another meaning Vulcan is related to male fertilizing power, in Latin and roman legends he is the father, being seen as a primordial being or king that is later transformed into a monster that inhabited the site of Aventine in Rome.

The Goddess Pele is the Hawaiian Goddess of the Volcano, she was meant to grow to become the water goddess, but after discovering matches her fascination for fire took her in a new direction. After ignoring her mother’s instructions she managed to set her home a light while playing with fire from the underworld.

Pele’s older sister Namaka the sea goddess of water threatened to flood the island to punish Pele for her actions. Fearful for their safety they loaded a canoe and headed for another island. After a period of searching and meeting some very unhappy people along their journey.  Pele laid claim to Mauna Loa Island which had the tallest mountain on earth, resulting in her sister Namaka and her powerful ocean waves not being able to reach that high. Pele was able to keep her fires lit, but this fuelled her sister’s rage and both went into a ferocious battle.

Pele’s fires rose up out of the trembling earth, sending rivers of lava into the ocean, driving the sea away from the coast. As the lava cooled it created a land mass and was transformed into the island of Hawaii. Pele did not survive her viscous attack and she was transformed into a spirit, taking up residence inside her volcanoes.

Culture
The word lava derives from the Latin word ‘labes’ which means to fall or slide.  With the first use being the connection with extruded magma, meaning molten rock from below the earth’s surface, this was apparently written in an account by Francesco Serao on the eruption of Vesuvius. He described ‘a flow of fiery lava’ as a similarity to the flowing of water and mud down the flanks of the volcano. The word ‘basalt’ derives from the Latin word ‘basanites’ which means a very hard stone.

Astrological
The first sign of the Zodiac represent the Volcano and is the first initiative eruption, being the force of drive and power. The volcano’s spheres impacts susceptibility to fire damage. The astrocasting rays of the zodiac mean that any planets with in the sign can strike the intended target, if there are no planets within that sign then there is no effect. The effects of the planet are not determined by the target but by the sign, so if the moon is in volcano than a volcano ray will cause the target to hallucinate regardless of their nativity. 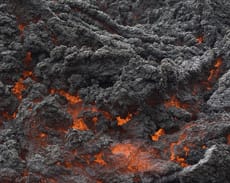 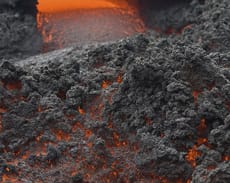 The Goddess Pele is the Hawaiian Goddess of the Volcano, she was meant to grow to become the water goddess, but after discovering matches her fascination for fire took her in a new direction. After ignoring her mothers' instructions she managed to set her home a light while playing with fire from the underworld.