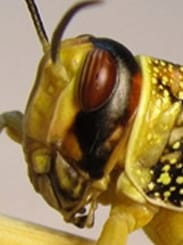 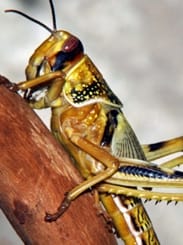 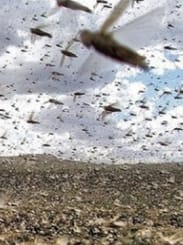 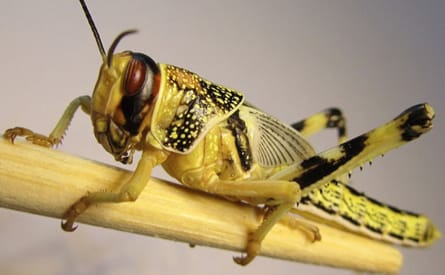 Frenzied, pent-up energy, holding it in until it bursts,
then manic activity with intense sexual impulses.

Typically this patient feels as if they had been taken over by overwhelming forces that drive them into frenzied activity. They feel energy is building up inside, and they are holding it in until it bursts out with explosive force. They are losing control. They must dance. They may be compulsively gregarious. There are intense sexual impulses, often leading to compulsive masturbation. There is desperate hunger and the compulsive need to eat, including raw meat. There may be self-loathing and disgust. They feel they are revolting, as if rotten, festering and decaying. There are delusions of being menaced, of supernatural forces, ghosts and witches. There may be feelings of vulnerability and fear of attack, of persecution, of alienation from one’s group, of being an outsider. They often feel numbed, as if they were detached from their body.

The locust is hemimetabolous and it moults several times. At each larval stage, or instar, it is a little more like the adult form. Only the adult form, the imago, is able to fly; the nymphal forms move by jumping and are called hoppers. The hoppers can swarm but there are never mixtures of hoppers and adults. The female lays her eggs in the ground pushing them into the earth with her long adapted abdomen. The time taken for the eggs to hatch and for the larvae to develop, varies tremendously, and is vastly speeded up when in the gregarious state.

Locusts are associated with immense destructive power. They can form swarms of many billions of individuals, each of whom will eat its own weight (2 g) of vegetation every day. In the years in which the largest swarms occur, locusts can completely destroy vegetation over an enormous area, hence its name and place in biblical and other histories, as one of the plagues that afflict mankind. On the other hand, the locust (perhaps all Orthoptera depending on the authority you consult) is the only insect that is regarded as kosher and halal, and is the most widely consumed of all insects.

Whilst the locust destroys the crops of the landowner it is can be a nutritious windfall to those that have nothing to lose.

When swarming, the insects are vulnerable to many predators. The unpredictable nature of the swarming behaviour means that no predator can adapt to an exclusive diet of locusts but a great number of them do take advantage of the plentiful food that a swarm, particularly a swarm of hoppers, provides. Not only are individuals vulnerable but whole species are too. The Rocky Mountain locust of northwestern America produced larger swarms than any other insect. One swarm in 1874 covered an area greater than California and contained 12,500,000,000,000 individuals, yet 30 years later the species was extinct.

Swarming occurs when favourable conditions cause the number of locusts to increase. When this happens they are more likely to come into contact with each other and if they rub their legs against those of other locusts, a certain number of times, a serotonin-based reaction occurs, which causes a hormonal cascade and the release of pheromones. The insect then changes from its solitary form to the gregarious form, which reproduces more quickly and forms huge destructive swarms. In years of recession when there is no swarming, the individuals live quietly in an area of Africa, north of the Equator. In swarming years, they spread throughout Africa, into Europe and across the Middle East as far as India. Related species are found in America and Australia.

Ancient Greeks: Socrates states that locusts were once human. When muses first brought song into the World, the beauty of the locust captivated the people so much so, that they forgot to eat and drink, and subsequently died. The muses turned people into locusts, so they could sing for their entire lives.

Word derivation: The words 'lobster' and 'locust' are derived from the Latin word ‘locusta’, referring to types of crustaceans and insects.

Ancient Egyptians: Carved locusts have been discovered on tombs in the period 2470–2220 bc. The grasshopper was a common motif for the Ancient Egyptians and used as a hieroglyph. It represented a symbol of beauty and of life along the Nile. Due to the association with large numbers, this became the hieroglyphic meaning for locusts. On the wall of Medinat Habu reads an inscription, ‘Battalions will come like the locusts’. In Mereruka tomb, locusts are carved into the wall and represent life along the Nile. They are also found in the tomb illustrations from the New Kingdom and Tel el Amarna, in which the locust is drawn in full flight with their hind legs held along their sides. These illustrations were significant as they showed that the locust wings were drawn with the hind wing in the same shape as the forewing. Thomas Hoving in Tutankhamun: The Untold Story (1978) tells us that locusts were also used as models for productions, the best known of which, is the grasshopper toilet box found among the treasures of King Tutankhamun.

Religion: A recent swarm has been descibed as, 'A plague of Biblical scope in 2020 [with] titanic swarms of desert locusts resembling dark storm clouds ... descending ravenously on the Horn of Africa.' In the Bible, a swarm of locusts comprised the 8th plague in the story of the ‘Plagues of Egypt’. This was because the Pharaoh refused to set the Israelites free so God decided to punish him. Locusts covered the land and swallowed up every crop and all the fruits of the trees.

‘They invaded the whole land of Egypt and settled on all its territory in swarms so dense that the like of them had never been seen before, nor ever will be again.’  Exodus 10:14

Plagues of locusts are also mentioned in the Qur'an:

‘We sent upon them the flood and locusts and lice and frogs and blood as distinct signs, but they were arrogant and were a criminal people.’ Surah al-A'araf (The Heights – border between Hell and Paradise), Qur'an 7:133

‘They will emerge from their graves with downcast eyes, like swarming locusts.’ Qur'an 54:7

The Book of Revelation, which is the last book of the New Testament, speaks that locusts with scorpion tails and human faces, are to torment unbelievers for 5 months when the fifth trumpet sounds. It is recorded in the Bible that John
the Baptist consumed locusts and wild honey while living in the wilderness.

‘John was clothed with camel's hair, and with a girdle of a skin about his loins; and he did eat locusts and wild honey.’ Mark 1:6

Food delicacy: Locusts are eaten in many African, Middle Eastern and Asian countries. They have been used as food throughout history, and can be cooked in a variety of ways, most often being fried, smoked or dried. In the Torah, the use of most insects as food is disallowed, however the consumption of certain locusts is permitted. In Islamic jurisprudence, eating locusts is considered halal.

Scientific uses: Locusts are used in biology, especially for olfactory modelling, they are also used in neurophysiology to study the functioning of the nervous system and in locomotor studies, looking at movement and progression from one place to another. Locusts are useful as experimental insects because they are robust, reproduce quickly, and breed readily.

Swarming locusts are legend for their destructive and voracious appetites, and these elements featured in the proving. As with other insects high energy, buzzing and sex were present. Other, perhaps more defining particulars also emerged in the proving. These include fear of the destructive swarm that approaches in a great black cloud and blots out the sun, which brought about a sense of feeling terrified and jumpy, in many of the provers. The core sensation for the proving relates to metamorphosis – a transformation between 2 states. The first state is solitary, with a feeling of timelessness and disorientation. In this state, there was a strange desire to sit still and listen expectantly, in a moment of nothingness. The transformation was accompanied by a buzzing sensation in which provers were exquisitely sensitive to noise as they moved into the second state – the gregarious phase – described by one prover as a constant feeling of frenzy. This phase was experienced as frenzy about eating, sexual irritability, and craziness, which corresponded to the intense and explosive energy of Schistocerca gregaria plagues. The state is social and involves seduction, where a low level of sexual excitement builds to a crescendo of uncontrollable need that cannot be denied. This concept is expressed in many symptoms including, gases building up in the digestive tract until they burst out in explosive belching, exercising to allow pent up energy to dissipate, and irritability – common in insects – expanding to uncontainable anger. The degree to which this energy becomes beyond the control of the patient leads to a deep fear of losing control, and a desire to keep everything in order.

The need for order was described by Prover 6 as an obsession: 'Tidying and cleaning more than usual. It feels more like a compulsion'. This sense of compulsive tidying ties in with the locust's behaviour in swarming when the insects orient themselves in the same direction for self-preservation. The idea of being inside or outside the group – with no intermediate state – relates to swarming and was characteristic in the proving. The more locusts there are in a group, the more stable the swarm becomes, and this was reflected in the proving diaries. Provers had a need to be part of the group, and felt alone and abandoned away from it. However, they felt suffocated by demands of the group and better cut off from it. There is no hiding in the group and therefore no secrets. Provers had an urge to speak the truth: 'this is the inner "truthful" me'.

As with most of the insect remedies there was low self-esteem and even a sense of self-disgust. The locust, like all insects, is vulnerable and this emerged in the proving with tearfulness brought on either 'for no apparent reason' or from a spin of emotions that included exhaustion, anger, depression and being terrified. The fear experienced by many provers was an echo of man's alarm about the approaching swarm, and the locust's fear of its many predators. The strategy of producing vast numbers of progeny is an acknowledgement that so many of them will be killed and eaten by snakes, lizards, birds, mammals, and even man. The swarms of many billions of individuals last only a few years before the numbers are vastly reduced – in cold dry conditions, and when there is insufficient food – to the typical state in which only a few individuals survive to keep the species alive. Prover 4 recorded her experience of fear of survival and vulnerability, writing, 'It was a cry for help and survival and I called my mother and best friend and they didn't want to come and I felt like my life lines were falling away and started to have a panic attack, shaking, cold, sobbing, nearly hyperventilating, shock, fear, thought I was not going to survive. One amazing friend came to my rescue and I feel totally indebted to them for saving me. I didn't know what I was going to do, I was really on the edge of reality and felt like I was, am totally losing it ... When my friend arrived I just grabbed hold of them and didn't feel safe unless they were really close to me, even when I got up to get some tissues and had to walk away from them I felt unsafe. I am crying this morning because I don't think I can go on like this.' 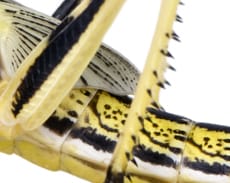 The Locust is associated with tremendous destructive power. They can form swarms of many billions of individuals each of whom will eat its own weight (2g) of vegetation every day.