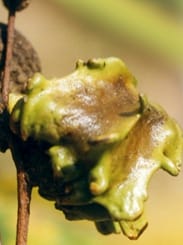 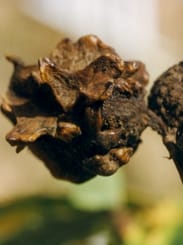 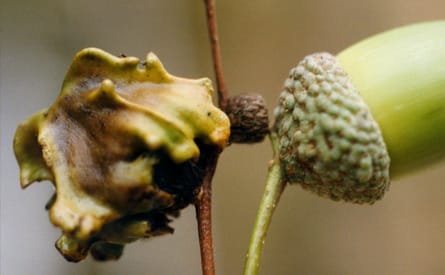 About the Plant
Andricus quercuscalicis is a gall wasp species inducing knopper galls. It is a mass of green – yellowish, that is ridged, with sticky plant tissue on the bud of the oak, breaking out as the gall between the cup and the acorn.  It is a rigid out growth on the acorn; they are sticky and red, later becoming woody and brown.

Source and Description
Andricus quercuscalicis is a gall wasp species inducing knopper galls. These develop from a chemically induced distortion of growing acorns on pedunculate oak trees caused by gall wasps, which lay their eggs in the buds. Gall wasps are part of the family from the order Hymenoptera, which are classified with the Apocrita suborder of wasps in the larger family Cynipoidea. Their common name derives from the galls they induce on plants for larval development. The gall provides developing gall wasps with a safe refuge during the most vulnerable time of their life cycle. Using their ovipositor they bore through the gall and lay their egg on the gall maker. The larva of most gall wasps develop in the plant galls where they induce themselves. The plant galls develop after the female lays her eggs. There is no known evidence that explains inducement for the formation of the gall, however many speculate that there are chemical, mechanical and viral triggers. When the larva is hatched it is nourished by the nutritive tissue of the galls, in addition to it providing a protective cover from the external environmental factors.

The host plants and the shape and size of the galls are specific to the majority of the gall wasps, where as the various types of oak trees have 70% of the known species. These wasps live prominently as gall formers on oak trees. The gall produced can greatly reduce the reproduction of the oak host, making the gall potentially a threat to the reproduction of the tree.

The word Knopper comes from the German word ‘Knoppe’ meaning a flat cap or helmet that was worn during the 17th Century.

History
In 1735 the turkey oak was introduced into Britain and was required for the completion of the gall life cycle. Andricus quercuscalicis is a small gall wasp that obligates two-phase life cycle on pedunculate and turkey oak. This species as alternate sexual and parthenogenesis generations, developing in spring as small conical galls that form on male catkins of the turkey oak.

Woodway Gardens in Devon are hosts to both species, and were the first to send off research specimens of both life cycles stages. It had spread from Southern and Eastern Europe over the duration of 400 years. It came to Devon from the continent via the Channel Islands, appearing to arrive naturally crossing the English Channel on high altitude wind currents.  During 1979 Andricus quercuscalicis became out of control with a population increase, causing grave concerns that it would affect acorn fertility and affecting the future of England’s most ionic tree.

Knopper galls were first noted in Canonbie in southern Scotland in 1995, with their distribution often restricted to old country and urban estates. The acorns develop normally during the summer and are replaced by the gall growth, with the knoppers becoming woody and brown in early autumn, where they fall from the tree and the adult sexual female gall wasp merges through a vent at the top of the gall in spring.

Medicinal
Galls are used commercially in the preparation of gallic and tannic acid. They are used in tanning and dyeing for the manufacture of ink. They are a powerful astringent used as tincture internally in cases of dysentery, diarrhoea, cholera, in addition to being given as an injection for gonorrhoea and leucorrhoea.   Preparations of gall are applied as a local astringent externally, commonly as an ointment applied to painful haemorrhoids. It can also be used to gargle on enabling it to relax the throat and soothe inflamed tonsils.

Folklore/Mythology
Oak is the best known and loved of English trees they can live for up to 500 years, with some be established to be 100 to 200 years old. Pedunculate means ‘stalked’ and refers to acorns, that grow on long stalks.  Quercus is thought to come from the Celtic ‘Quer’ that means ‘fine’’ and ‘cues’ meaning tree. The common name oak derives from the Anglo Saxon ‘old norse’ which means ‘fruit’ or ‘acorn’.   In folklore oak was held in high esteem throughout Europe, and was held with high regard and respect in association with supreme gods of the Greek, Roman, Celts, Slavs, and Teutonic tribes.  Druids held their rites and worshipped in oak groves, the term druid is seen to mean ‘men of the oaks’ derived from the Gaelic term ‘duir’ meaning oak.

Oak crown leaves were worn by ancient kings to symbolise the gods that they represented on earth. This high regard for oak held by the Celts filtered through to Christian religion, many pre historic churches were built near the sites of pagan oak groves.  Carvings of oak leaves, acorns and galls can be found in many parish churches, and in most of our English cathedrals, often they are hidden away under misericords or high in the roof. Celts believe that oak has significant power to preserve youth, to protect from lightening, and can cure toothache, bruised leafs were used to heal wounds.

Oak was used also in the tanning of leather and for making of dyes of various colours when mixed with other substances. Acorns were a traditional food for pigs over the course of many centuries, however they have also been used to supplement human food, especially in times of shortage, being dried and ground into flour or made into a coffee substitute.

Astrological
According to Celtic astrology from the Druid and Ogham properties, Celtic tree astrology is based on the ancient idea that the time of births is pivotal to the formation of our behaviour and personality. The oak tree is seen as the stabilizer and those born under this tree are seen to have a special gift of strength.

They are described as protective people, and will speak out for those who feel they do not have a voice. The Oak tree is defined as a crusader that is nurturing, generous and helpful and is seen as a gentle giant among the Celtic zodiac signs. Those under this sign will be confident and positive; they like structure, often going to great lengths to gain the feeling of control. Living long and happy lives, enjoying family, and social/community time. 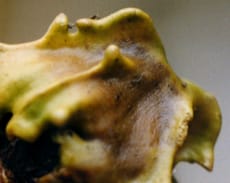 The word Knopper comes from the German word 'Knoppe' meaning a flat cap or helmet that was worn during the 17th Century.