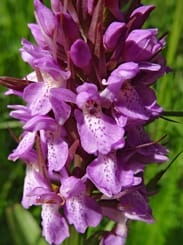 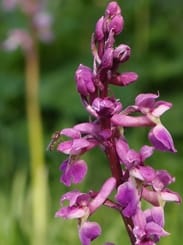 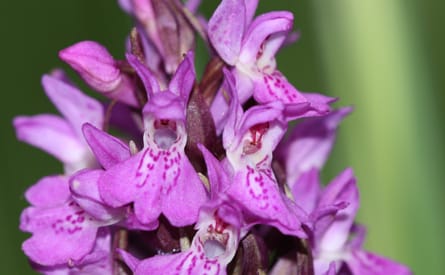 A Dactylorhiza patient typically plays the field, being coquettish, uninhibited, childlike, and subsequently feels disrespected and undervalued. They readily blot their book by what is held to be socially inappropriate behaviour. They will mask their anxiety about being ostracised with a bright and happy persona so that people may regard them as fascinating and funny; as top performers. Beneath the playfulness and seductive behaviour they feel they have acted badly on many occasions, which is why others shun and betray them. The Orchid family as a whole (see Louis Klein’s Orchids in Homeopathy) cannot help but behave like kids and teenagers, often viewing life as a game, having sex for the fun of it, and only accepting their adult responsibilities with distaste. They can be deceitful, feel guilty and as a consequence, reproach themselves. They can turn to religion believing they are Divine and filled with golden love. In the proving there were also themes of violence and brutality – morbid impulses to hurt others and stab their own flesh with a knife – and dreams of death, dead bodies and skeletons. There is clairvoyance and clarity of vision. The proving revealed a powerful physical affinity for the eyes, that felt as if they had enlarged, as were the often dilated pupils, which let in too much light. Some experienced greatly extended peripheral vision. It is worthy of note, that these Belladonna-like symptoms are associated with fascination; the entire visual field becoming, as it were, saturated by the other. In Belladonna this is related to the object of terror, while in the orchid family with sexual allure.

The orchid family, Orchidaceae, is the largest and one of the oldest family of flowering plants with 880 genera and over 35,000 species. Orchids lived alongside dinosaurs 120 million years ago. Over time, the plant has developed complex pollination strategies. Using colour, shape and smell, they cunningly attract insects, deceiving the pollinator into believing they have nectar or that they are a sexually available insect. Orchids are incredibly adaptable hence the vast number of species. The seeds are tiny, allowing widespread distribution however, it means they have no endosperm to sustain them through germination and early growth. Thus, in order to find nutrients for germination, they form a symbiotic relationship with fungi. As a perennial, orchids can survive without pollination by division, with parts of the plant breaking off in high winds or other adverse situations and generally continuing to thrive wherever they land.

In the UK, there are 56 native species of orchid, of which Dactylorhiza praetermissa is one. Dactylorhiza praetermissa orchids hybridise easily with other species of Dactylorhiza – in other words, the boundaries become blurred. Often, an entirely new hybrid will emerge in a previously-untouched habitat and will continue to prosper for many years until it is replaced by a secondary succession. This highlights the versatility and resilience of the genus, and suggests that we may expect them to remain a feature of our natural habitat for years to come. Dactylorhiza are geophytes of the tuberous variety and can survive harsh conditions by storing enough water to sustain them. The stem can reach heights of 70–90 cm and the leaves taper to a point with the plant’s higher leaves being shorter than those further down the stem. The flowers are concentrated near the top of the plant and there can be as many as 50 on a single plant. The main colours of this particular genus range from red to pink and are dotted with darker flecks throughout. The flowers of some species of orchid can rotateand appear upside down.

Orchis: in Greek mythology, was said to have been born of a nymph and a satyr (half man, half goat). It is said he disgraced himself by attempting to sexually assault a priestess. His punishment was to be ripped apart by wild animals and then transformed into the iconic plant known today, as the orchid. The name orchid is derived from 'orkhis' the Greek word for testicle, as some species have 2 tuberous roots that resemble testicles. In Middle English, they were called ballockworts.

Orchid hunters: The Victorians were captivated by the beauty of orchids, collecting and displaying them. Orchid hunting was popular in the mid-19th century with no concern for conservation. A reknowned hunter, Frederick Sander – Queen Victoria’s orchid grower – employed orchid hunters to transport orchids from South America to England. Hybridisation of orchids became popular at this time, and Sanders published the first list of orchid hybrids. Despite their rarity, international collectors still hunt and trade for orchids. Of note are those orchids whose flowers are a mix of yellow and purple, and rarely found in nature. Orchids are protected by law in
the UK.

Charles Darwin: the English naturalist and biologist, wrote about orchids and their pollination in Fertilisation of Orchids (1862). He describes the complex relationships of orchids and insects, detailing Angraecum sesquipedale – the 'Star Orchid' – and its exceedingly long nectar spur, which he came across in Madagascar. He hypothesised that a certain moth with an unusually long proboscis must have existed in order to pollinate it. 21 years after Darwin’s death, the Sphinx moth
was discovered (in 1882).

Habitat conservation: There is concern today about the preservation of orchids. The plant is included in the Convention on International Trade in Endangered Species (CITES) and there are many national and international conservation groups focusing on preserving native habitats and propagating species in green-house settings.

Medicinal uses: The Aztecs were known to drink a mixture of chocolate and the seed pods of Vanilla planifolia, for strength. Oregon Inland Plateau natives used Goodyera oblongata as a medicine. In traditional Chinese medicine, the orchid
was used to help cure coughs and lung illnesses. The Ancient Greeks used certain orchids as aphrodisiacs. Many orchids are sensual in their appearance, to touch and in their scents.

The orchids used in the proving were located on Gaddon Down, near Ashill, Uffculme in Devon. The flower spikes and leaves from 3 plants were selected from different areas of the colony, the setting of which affords stunning views of the Culm Valley. Gaddon Down had been a domestic waste site that was closed in the late 1970s, and provides a perfect setting for Dactylorhiza praetermissa to thrive because the site was covered with a clay soil which pools in Winter, dries out in the Summer months, and is inhabited by juvenile deciduous trees giving partial shade.

Orchids rely heavily on mycorrhizal fungi for their survival, and fungal themes abound in orchid provings. Louis Klein in Orchids in Homeopathy (2014), describes darkness and decay being the realm of these organisms, inviting orchids to transform the dark energy. This darkness was echoed in the proving with provers losing connection with family and community, and becoming self-obsessed and narcissistic, with little care for others. There was a fear of presences and evil spirits, and a lack of inhibition and wildness was experienced, with provers finding themselves contemplating the use of violence, brutality and cruelty.

Dactylorhiza praetermissa demonstrated a tendency to deliberately mislead others in order to get what the prover wanted. Insects may copulate with the orchid’s specially-adapted flower parts that mimic another insect of the opposite sex. It is a deception that benefits the orchid, but offers little to the insect because there is no nectar. This essence of betrayal and deception – 'The Trickster' – is detailed by Jan Scholten in Wonderful Plants (2018), who writes, 'They can be like teenagers thinking they can get away with deception, thinking they know everything.' Scholten tells us that the Orchid patient, '[wants] to be respected and valued. But they often have the feeling of not being good. They have done too many sins. They feel there must be something wrong with them; that people leave them, cheat and betray them.' Ultimately, they are dragged down in an endless spiral of hell and being punished for their misdemeanors.

Where there is dark there is light, and such was the degree of light in the proving, that one prover found herself blind for a few minutes. In others, the eyes felt larger and the pupils seemed to let in too much light. Feelings of joy and a sense of fun emerged in the proving; everything was beautiful in a landscape of death and destruction. There was an urge to cleanse, rejuvenate and create order. This aspect of light is naturally imprinted in the Orchid essences as well. Clare Harvey in The Practitioner's Encyclopaedia of Flower Remedies (2015) tells us that, 'the Orchid flower's essence transmits to us cosmic light and enhances our ability to open our conscience to higher knowledge'. The notion of connecting to the higher realms and hearing voices, is reflected in the name of the Living Tree Orchid Essence, Crown of Consciousness. We can see the connection to the higher chakras and Divine grace, in the Signature of orchids, and the nature of many of them growing as epiphytes, even taking on the shape of angels. In the provers, there was great sensitivity, empathy and clairvoyance with an appreciation of beauty and the Divine. Accompanying the sensitivity came a heavy guilt, which Scholten describes as, '[feeling guilt] for what they have done, or what others have done ... they have to redeem the mistakes made by humankind.' This brings about a sense of togetherness and bonding in the group of provers that related to being attacked by an outsider and supporting each other in the face of that attack.

Provers experienced issues about adaptation to the environment – emotional and spiritual, as well as physical – and letting go of past beliefs. Losing fixed ideas can lead to confusion and this symptom, along with being disorientated, featured strongly in the proving, especially in relation to time. Like the orchid, which adapts to its habitat by growing towards the light as a means of escape from the darkness below, provers did not wish to limit their freedom by being tied down and restricted. Their ideal was to live as if every day were their last, preferring the lifestyle of adolescents and students. Many Orchid patients would like to stay in this state forever – the puer aeternus – a term used in Jungian psychology to describe those individuals who lead an uncommitted, provisional life, due to the fear of being trapped in a situation from which it might not be possible to escape. The Orchid's lot is seldom what she really desires and one day she might do something about it – but not quite yet! 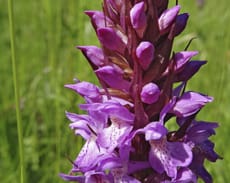 Sensation of not needing to prove myself to anyone; to be far less ready to constantly put others before my own life needs. Happy to go along with plans of others; want friendships and social times with friends but not prepared to be manipulated or bullied into doing things that are uncomfortable for me.