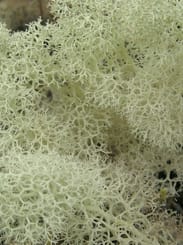 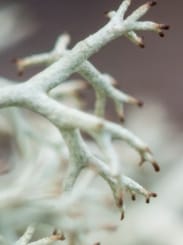 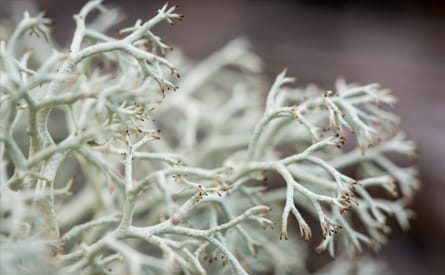 About the Plant
Cladonia rangiferina is also known as Reindeer Moss, Caribou Moss, and Reindeer Lichen. These names, and its highly branched growth pattern known as fruticose are often misleading in its appearance to moss. Its most common name is Reindeer Lichen this is because it is a vital source of food eaten by reindeer. It is a  lightly coloured plant that has a 3 dimensional branching with a  bushy appearance, it belongs to the Cladoniaceae family.

Source and Description
Reindeer lichen is a slow growing plant that is only reported to grow by 3-5mm per year. Due to destruction by overgrazing, burning or being trampled on it is leaving us with the consequence that it may take decades for this plant to return to those areas.

As we are aware Reindeer Lichen it is extremely branched, each dividing into between three and four thicker branches. The colours vary from whitish, grayish or a brownish grey.  It forms extensive mats up to 10cm tall, with the branching at a smaller angle.

It has no sufficient protective layer but a loose layer of hyphae that covers the photobionts (Trebouxia irregularis a form of green algae). Lichen have two separate organisms fungus and algae, because of this successful combination the fungus provides moisture and minerals, where the photobiant algae provides photosynthetic nutrition. Lichen can survive for long periods of time without water. They dry out and go dormant when there is little water or light. They can begin to grow again even after very long periods of dormancy.

Habitat
Being a hard plant in can grow in a variety of habitats from hot and cold climates that are well-drained, open environments. It can particularity dominant the ground in many pine forests and low alpine sites, in addition to rocky ground and in humid areas.  Renideer linchen is refereed to as any several species that are consumed by the reindeer in Euraisa and Carbiou of North America it constitute about 90% of their diet during the winter months and 50% in the summer.

Medicinal uses
In the 15th century the Doctrine of Signatures stated that ‘a planet could treat a disease it most looked like’ this created the phyto-therapeutics in traditional medicines such as traditional Indian medicine, Chinese medicine and Western herbal medicine.  The term lichen comes from the Greek word ‘leprous’ referring to the use of lichens treating skin disease, due to their peeling skin appearance. It has been used in the treatment of pulmonary and cranial diseases.

During the Middle Ages lichens figured prominently as the herbs used by practitioners. Northern native people used it t treat colds, arthritis, fevers and other problems. It was also used as a poultice to relieve the aches of arthritic joints. In addition it could also help with constipation, convulsions, tuberculosis and a useful remedy of whooping cough.

The medicinal use of lichens in the 18th century where it was first used as a drug, being claimed to be good for coughs, jaundice, rabies and restoring hair loss. In Spanish folk medicine lichens were used to treat a variety of medical aliments.

Smith an Artic Pharmagcognoisa states that reindeer moss tea was used for chest pains for native hunters who were climbing hills in order for them to maintain their wind.

History
In the 1800’s Sweden led the world in lichen alcohol production where the rest of Europe and Russia followed. It was seen as an alternative to grain alcohol. Lichen brandy was very popular, and was also used in the making of Akvavit, a traditional caraway-flavored spirit.  Russia also made a molasses (black treacle); this was made from lichen highlights. Most lichen contain 94% carbohydrates, but due to their growth on rocks and stones, result in a rock dissolving acid that can burn your insides, however Reindeer moss in the most nutritious and least acidic.

Lichen is soaked in several changes of water to make it edible. A modern version to this is to soak them with hardwood ashes. China have their alternative way to make Lichen edible, which was to boil them for thirty minutes, they then soaked them for two days in several changes of water. They are prepared in a variety of ways to be eaten, and can be left plain or mixed with other foods, they are dried and added to flour to thicken soups, in addition to being used to thicken desserts. It is often cooked until it forms a gelatinous state.

In Scandinavia it has been used in the manufacture of alcohol, and are commercially grown to make a powder for the thickening of food.  Lichen is very rich in vitamins A and B.

Indigenous people of the Arctic known as Dene would eat reindeer lichen by killing the reindeer and harvesting its stomach, after the animal had consumed reindeer moss. They would remove the animal's stomach and make sure it was full of reindeer moss, then add the animal's blood. The mixture is allowed to ferment for a few days before they cook and eat it.

Mythology
According to Menomini legend, lichens are said to be the scabs from the head of Ma’napus. He placed the scabs where they were to keep his uncles and aunts from starving. In addition another version of this legend was that the lichens were the scabs from Ma’napus buttocks where he burned it, and as he slid down a slanting rock they came off.

The Okanagan-Colville legend is about how Bryoria fremontii was created from Coyote’s hair. The legend involves a coyote trying to catch some swans that end up sweeping him into the sky, flying away with him. They let him go when he was high up in the air, as he fell he became caught on the branches of the trees. Once he was able to free himself from the leaves, much of his hair was entangled in the branches. The coyote transformed this hair into Bryoria fremontii, and said ‘you, my hair, will not be wasted. The coming people will gather you and make you into food.’ 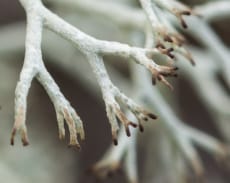 Lichen can survive for long periods of time without water. They dry out and go dormant when there is little water or light. They can begin to grow again even after very long periods of dormancy.