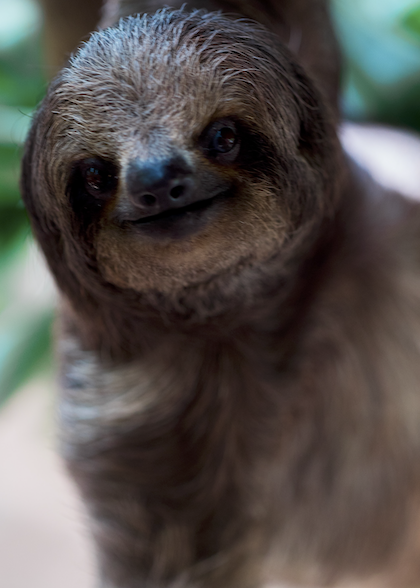 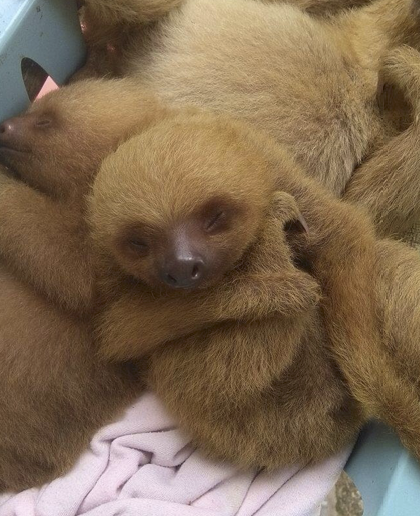 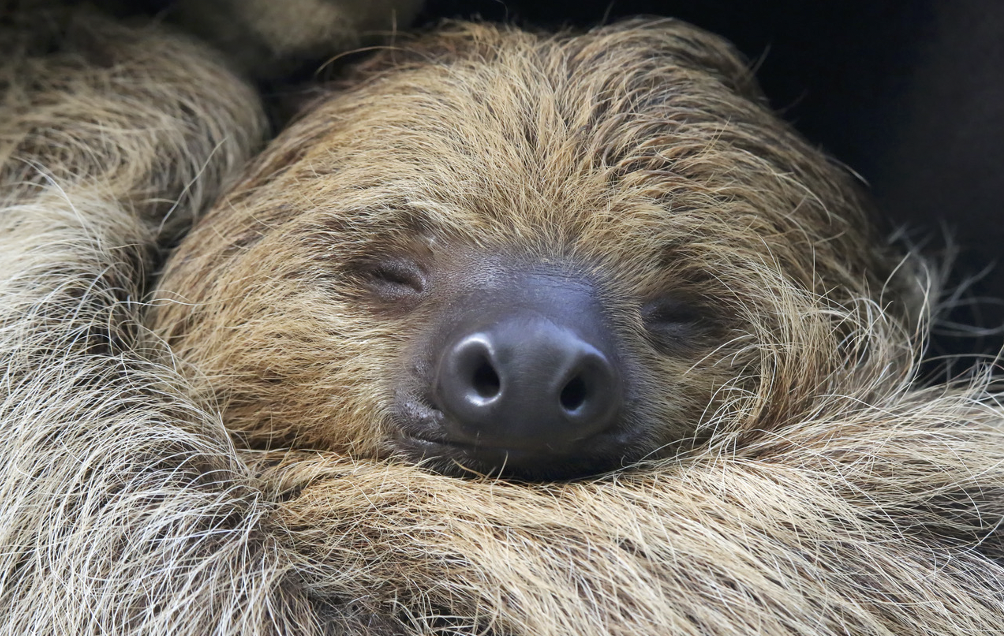 The remedy was prepared from a hair sample and run-up to the 30th centesimal potency by the proving group led by Mani Norland and John Morgan. There were 13 female and 2 male provers; each taking a single dose. The proving was fully supervised for a period of 2 months. The diaries were then collated and repertorised by Luke Norland.

Whilst the name "sloth" means lazy or idle, the slow movements of this mammal are a useful adaptation for surviving on a low-energy diet of leaves. They are so solitary in their nature that it is even uncommon for two to be found together in the same tree. The sloth spends almost its entire life, including eating, sleeping, mating, and giving birth, hanging upside down from tree branches. However, when the time comes for urination and defecation they slowly make their way to the ground. This seems to be rather a behavioural quirk, as whilst earthbound they are almost defenceless. Their shaggy coat has grooved hair which plays host to a symbiotic green algae, providing both camouflage and nutrients. The algae also nourishes moths, some species of which exist solely on sloths. Two-toed sloths have half the metabolic rate of a typical mammal of the same size. This fact, combined with their reduced musculature means that they cannot shiver to keep warm as other mammals do, so their body temperature depends on the surrounding ambience. They are reported to have very poor eyesight and hearing, relying almost entirely on their sense of touch and smell to locate food.

Sloths eat a diet of leaves, shoots, fruits, nuts, berries, bark, flowers, and even some small vertebrates. When they cannot find food they have been known to eat the algae that grow on their fur. They have four-chambered stomachs which helps to ferment the large amount of plant matter they eat. As their metabolism is so slow, food can take up to a month to digest which means that urine and faeces may account for up to 30% of the animal’s body weight (which averages around 6kg).

When threatened, sloths can defend themselves by slashing with claws and biting with sharp teeth. However, a sloth's main defence is to avoid being attacked in the first place. It’s slow, deliberate movements and algae-covered fur make them difficult for predators to spot from a distance whilst their treetop homes are out of reach for many larger predators. They can also survive wounds that would be fatal to another mammal of its size.

Habitat
Two-toed sloths live in the canopies of tropical rainforests. They usually tend to be found in the branches of trees that are intertwined within each other throughout the sheltering treetops. Although they also occupy shade-grown cacao plantations, they avoid open pastures.

Medical Uses
Adapted from the article; Fungi in sloth fur could have a wide variety of disease-fighting implications. Sloths are known for their thick fur which is home to a wide range of microorganisms and insects. A recent study shows that some species of fungi found in sloth fur could eventually be a potent force against certain parasites, cancers, and bacteria. Sloth fur has two layers. The inner layer is short, fine, and serves to keep the sloth warm. The course outer layer is where many of the organisms live. Green algae grows in the cracks of the hair and lives symbiotically with the sloth. The algae has a nice place to grow and the sloth benefits by getting a green tint in its fur, which helps camouflage it among the leaves in the rainforest..

Eight of the fungi tested had high levels of bioactivity against Trypoanosoma cruzi, the parasite associated with Chagas disease. Chagas can result in swelling, fever, diarrhea, and enlargement of the liver. Plasmodium falciparum, the parasite to blame for malaria, was affected by two of the fungi. The researchers tested the fungi against fifteen types of bacteria which were a combination of gram-positive and gram-negative. Twenty types of fungi were shown to be active against at least one strain of bacteria, and gram-negative bacteria was more susceptible to the fungi than gram-positive. The research also discovered a single species of fungus which was active against methicillin-resistant Staphylococcus aureus (MRSA), which is responsible for thousands of deaths each year.

Overview of the Proving, by Mani & Luke Norland

Sloths reputedly do not fart; they have four stomachs, their coats are covered with algae and alive with billions of bugs. They sleep hanging from a branch by their nails and they have a ‘superpower’ of invisibility, making them one of the least hunted animals. Oh, and did we mention, they are also very slow. When we began the proving of Sloth, there was a palpable calmness in the room. Each proving usually begins calmly, but the Sloth proving was memorable for the sleepy stillness and tranquil atmosphere. We were speaking softly, slowly and quietly. Then the door opened and we were interrupted... but no one was there - whoever it was simply closed the door again; we were disturbed yet unseen.

Sloth is famed for being a very slow-moving animal and this quality pervaded the proving – no great surprise there! The provers’ experience of the slowness was primarily calm, meditative and ‘swimmy’, with drug-like sensations. Sloths live alone and the proving features intense themes of isolation and separation - feeling invisible or within a bubble. This brings to mind the image of a Sloth hanging upside down, hidden in the trees with its invisibility cloak (of algae and bugs). Not only does it stay hidden with slow movements but it’s multi-layered coat also camouflages it’s smell.

The secondary action brought with it feelings of exclusion, apathy and an ‘outsider’ mentality. For some this manifested as boredom or sadness, whilst others described a sense of vulnerability - feeling frozen by the fear of violence. Many provers became alert to conflict; observing it happening and identifying strongly with those who had been victimised. One prover who witnessed bullying felt an undeniable urge to speak-up and defend injustices. Another developed vindictive thoughts described as ‘cold and dark’.

Making connections with the main proving themes, one version of the overall narrative could be:
The Sloth individual conserves energy; moving slowly whilst calmly taking life in. They hang-around, staying safe, alone with their own thoughts - seeing the world clearly. Yet within their bubble they become lonely and isolated, leading to procrastination and boredom (Sloth is of course one of the seven deadly sins, referring to idleness). They may develop a deep sense of shame, self-loathing and fear of criticism; disgusted by their own odour, suspicious that others treat them as an outsider. They hide in the canopy; feeling vulnerable and alert to danger – tending to internalise everything. They witness the violence of the jungle; the bullying, abuse and death. The injustice becomes overbearing and they are compelled to speak up. They have flashes of aggression, anger and violence- they can attack when threatened and even move quickly when excited. For love, warmth and hugs they need a mate; Sloths share the same communal toilet and return each time. Here, by the ‘poo-pile’, they may find a sexual partner and feel part of the group for a while. In the absence of the mammal need for warmth and affection, they may develop addictive compensations; seeking comfort in bingeing.


The Sloth
By Theodore Roethke

In moving slow he has no Peer.
You ask him something in his Ear,
He thinks about it for a Year;
And, then, before he says a Word
There, upside down (unlike a Bird),
He will assume that you have Heard
A most Ex-as-per-at-ing Lug.
But should you call his manner Smug,
He'll sigh and give his Branch a Hug;
Then off again to Sleep he goes,
Still swaying gently by his Toes,
And you just know he knows he knows.


“So relaxed. So peaceful. I’ve never really been able to meditate, but this was the most a meditation has ever worked... I feel I am speaking slowly, calmly, it feels good, taking my time, meaning every word... Mind generally focussed and calm... Woke at the alarm again, feeling very calm and grounded. I feel like I am able to cope with anything.”