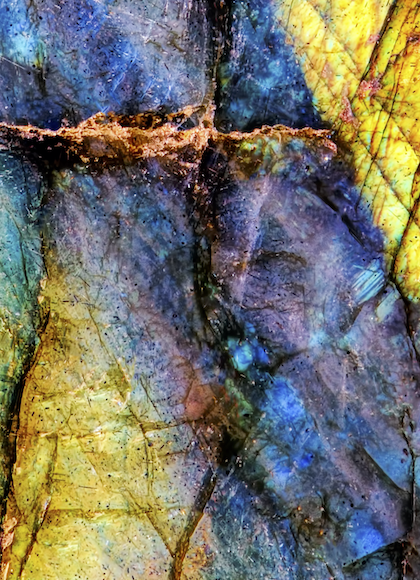 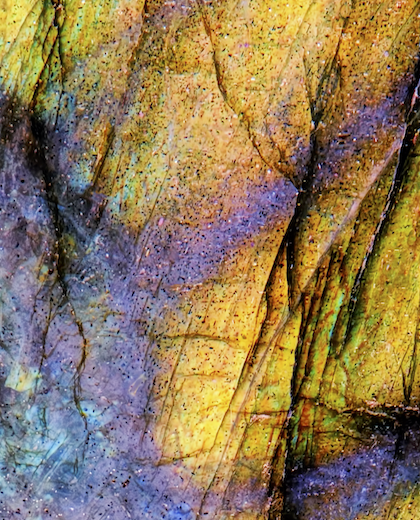 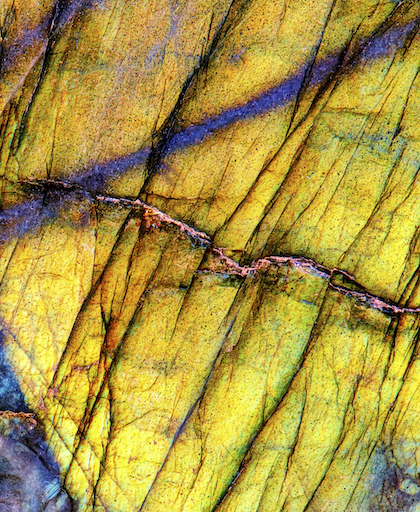 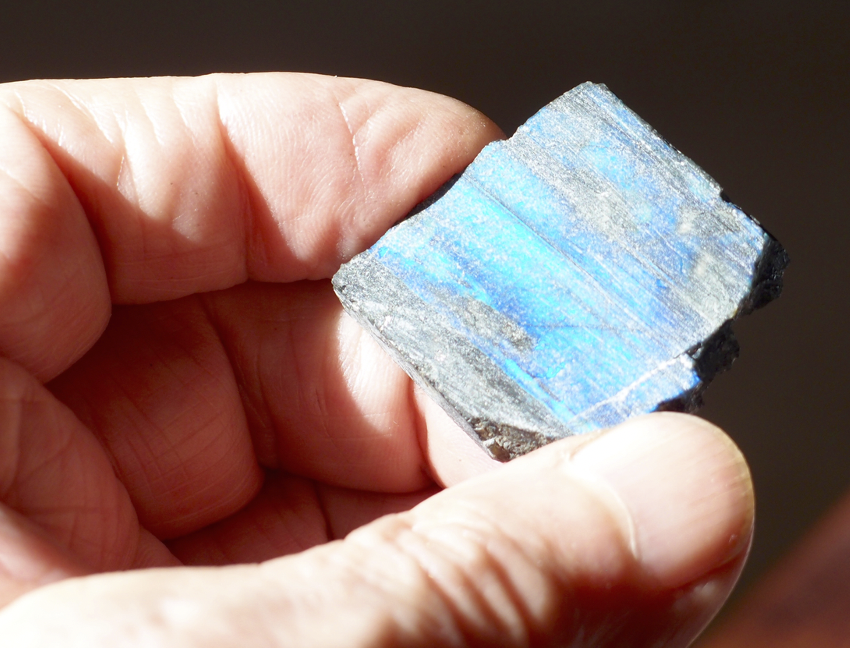 Danger and threat transformed
into clairvoyance and magic

The Spectrolite person experiences equally the qualities of light and dark, and is split between them, or the states may alternate. Danger, threat, attack, are pitted against transformation, magic and intuition. 'I had this sense of bliss, love and connection with the Source. I felt I was exactly where I was supposed to be and that filled my heart with happiness; I felt gratitude and connection with my Higher Self; I was my Higher Self.'

Peacefulness, acceptance, clarity, calmness, grace, spirituality are overarching characteristics. The person is supremely confident – she can effortlessly achieve anything, she is in the flow of the Divine, which is imminent, or she is bobbing along in an innocent, blissful state. Dreams of swimming or gliding on the sea.

The pathological state is the paranoid one, where she feels withdrawn, lustreless and drab, and disconnected from friends, alone and alienated. She needs to be in her own cocoon to feel safe.

The physical state is characterised by excessive moisture/discharges, or extreme dryness, itchiness, soreness, and a burning sensation. There may be redness, visions of red and other colours and there may be excessive bleeding.

Finnish labradorite is a type of feldspar. Feldspars are a group of rock-forming tectosilicate minerals that make up at least 41% of the Earth's continental crust by weight. Feldspars crystallise from magma as veins in intrusive and extrusive igneous rocks, and are also present in many types of metamorphic and sedimentary rocks. Spectrolite was discovered in 1940 during the excavation works for the defences in Finland for WW2. The Finnish named the stone, spectrolite, although it is a version of labradorite, similar to others found in Madagascar, Canada and Norway. The exceptional feature of the Finnish spectrolite is its luminescence that has a more diverse array of colours than other forms of labradorite, including those from the red end of the spectrum. Labradorescence is caused by structural patterns occurring within the stone during cooling of magma flows, or in metamorphic intrusions. The repeated microscopically thin layers (lamellae) made up of varying minerals show some fracturing, and also bring about the labradorescence along with interference and diffraction of light, which occurs when it passes through the stone.

The northern lights: Myth has it that the colours from the northern lights – the Aurora borealis – fell to the Earth, giving iridescent blue, green, red, orange, and yellow colours to the stone, and a sense of something otherworldy and uplifting. It is also referred to as the ‘Temple of the Stars’, bringing light from mystical realms. The essence of this legend is imprinted on the stone, with its reputation being one of magic and divination when used in crystal healing.

Crystal healing properties: Labradorite is associated with the heart chakra and helps to dispel negativity and brings clarity. It is a grounding stone and useful for accessing deep meditative states, banishing fears and strengthening faith in Self and trust in the Universe. It is also used to boost the immune system and relieve rheumatic pain. Spectrolite can be used as a companion through periods of change, imparting strength, perseverance, and enhancing intuition.

Astrology: Certain gemstones are associated with the Zodiac star signs, which have their roots planted in Babylonia, about 3,000 years ago. Labradorite, although not regarded as a traditional birthstone, is often considered a February
or March birthstone due to the iridescent blue, which shines through.

The Salpa Line: Spectrolite was first discovered at the Salpa Line in April 1940 when a line of defence on Finland's eastern border was built during a time of peace between 2 wars  – the Winter War and the Continuation War – to protect the country against a possible Soviet invasion. Excavations from rock for foundations of forts, dugouts, barracks, and gun placements revealed a stone of uncommon lustre, hidden light, and healing potential.

The earliest gemstone jewellery: dates back to early civilisations when talismans and amulets were carried, not only as a mark of status but also for artistry, protection, spiritual value, and a means of contacting gods and goddesses. Tribal cultures through the ages have used gemstones, and in 300 bc, records show that diamond was exported from India. The healing powers of gemstones was recognised by Romans, Ancient Egyptians and Greeks. Between the 11th and 13th centuries, during the Crusades, gemstones were regarded as being of high value and traded. Medieval man believed that a formidable light was discharged from gemstones and that this light contained magical forces of the divine.During the Renaissance in Europe, in the 15th and 16th centuries, gem cutting techniques were developed by faceting precious stones to show off their beauty with glittering sparkle.

Gemstones for healing: The metaphysical properties of gemstones have been celebrated through the ages and the healing powers of precious stones were recorded by the authors Hildegard von Bingen, John Mandeville and Arnoldus Saxo, during the Renaissance. There then came a lull in history, during which time gemstones were collected, worn and displayed for their beauty but their use as healing stones was disregarded in the absence of scientific curative proof. Today, gemstones have gained popularity, being promoted by luxury jewellers, celebrities, holistic therapists, and the many books and other resources available, which acclaim the healing potential, symbolism and allure of crystals.

James Maxwell: in his Treatise on Electricity and Magnetism (1873), describes the concepts of electromagnetism which underpins the healing mechanisms of gemstones. 'A crystal – which vibrates at its own frequency oscillations – vibrates within our own energy field through the physical law of resonance and creates a larger vibrational field, affecting the nervous system and transmitting the information to the brain. In essence, these connecting vibrations can harmonise frequencies and stimulate biochemical shifts that affect physical health in a positive, healing way.'

Misha Norland writes, 'Spectrolite, and its less colourful but more commonly occurring relation labradorite, are prized for their inner spectral light. This is caused by diffraction and reflection in a manner similar to light glancing off oil floating on water. The displays of colour appear within the stone, shining as if charmed into magical existence when the stone is illuminated. Likewise, the person needing the remedy lives in 2 states, either drab and dull, or spiritually inspired. This characteristic may be generic for the gemstone group of remedies. They typically feel depressed and locked away within themselves and/or have the desire for spiritual growth, to transcend the material realm. This is perhaps most vividly represented by diamond immersion.' Mani Norland writes, 'In the past the stone must have seemed very magical, with its glistening iridescent colours that shine forth from its dark surface. It would have seemed special and valuable (materialism, money, magic). When you split the stone it reveals its colours. It seems to hold onto traces of the fire of its igneous genesis. Looking at the glistening colours you feel you have found something special in nature (peace, calm, grace). You feel special, you use the stone for special ceremonies (meditation, channelling, awareness, connection). Others are impressed by the stone; you have power, recognition and status.'

Peter Tumminello has shone light on the healing power of gemstones in homeopathy. He used high quality gemstones to prepare homeopathic medicines, which were then proved. The themes that feature in the provings include:

Alignment and symmetry, Perfection, clarity and purification, Beauty, rarity and power, Precious and valuable, Grief, depression and feeling locked away within Self, Desire for spiritual growth and to transcend the material realm, Value and self-worth, Sensation of fracturing and splitting into shards

Spectrolite has a triclinic crystal structure, in which the crystals in the system have no symmetry, having been formed under great pressure, shearing forces and extreme heat. Other triclinic crystals include, amongst others, rhodonite, turquoise, amazonite and kyanite. Peter Tumminello, in Psyche and Structure, lists the principle themes of the triclinic psyche (the emboldened themes are those which were evident in the Spectrolite proving):

Tumminello writes, 'The triclinic state is heavily discordant, incongruent or deranged. As we survey the case, we find that there isn’t even one aspect of life experience where the individual feels contented, at home or at ease ... Their primary relationship is intractably discordant, there are insurmountable difficulties at work, they are unhappy with themselves and their future appears dark.' Provers felt withdrawn and dull, with a sense of distance and not belonging. They became impolite and materialistic, self-satisfied and competitive. These energetic themes contrasted with opposing qualities of sensitivity, peacefulness, acceptance, clarity, spirituality, and magic. The individual can perform magic and is in the heavenly flow of the Divine, being very much in the moment. Provers had dreams which reflected this sense, with recollections of floating, swimming or gliding in the sea. Water featured in physical symptoms too, with excessive moisture and discharges. In contrast to the watery theme was extreme dryness, itchiness, soreness, and a burning sensation; also the colour red, along with other colours, excessive bleeding, imagery of fire, and periods of anger, attack, injustice and abuse.

A proving supervisor wrote, 'First of all, we can see water very clearly. There were dreams about sea creatures, about tsunamis, dreams of floating, weightlessness, no gravity, floating in very deep water. A few provers experienced, in real life, things such as floods, broken showers or no hot water. There was a feeling of freedom, some provers saw dolphins swimming, gliding effortlessly in water. Some provers had streaming watery leucorrhoea, others had to urinate 4 or 5 times during the night. One woman had a watery period. There were dreams about urinating and weeping. The colour red is another strong theme of this proving. Blood was mentioned, some provers had nosebleeds, and one had blood in stools. There was a dream about a house on fire, the prover wanted to rescue her red coat. Someone ordered a coat that came red instead of blue, another prover bought a red wedding dress, someone went into a café where everything was red. There was a lot of violence, someone had fears of a car accident. Other provers had dreams about raw meat. On the first evening, after they took the substance, several of us spilt red wine. One prover said she saw people with red suitcases, or wearing red clothes. A prover relates her proving experience saying, 'It had been a very positive and magical experience. I had a curative action and feel much stronger and healthier than ever before. All my physical complaints (cystitis – had for 5 months, dry skin eruptions on hands – on and off for about 1½ years) have disappeared and I feel very healthy on all levels. Magically had lots of success doing things I didn’t think I could do (ice skating). I felt it wasn’t me skating but some magical force was doing it for me.' This sense of pleasure was echoed by other provers along with a spiritual connection and togetherness, which took another prover, '...  to a whole other level, one I didn’t know I could reach and that was truly amazing.'

Spectrolite, and its less colourful but more commonly occurring relation labradorite, are prized for their inner spectral light. This is caused by diffraction and reflection in a manner similar to light glancing off oil floating on water. The displays of colour appear within the stone, shining as if charmed into magical existence when the stone is illuminated.