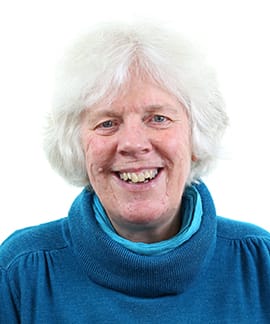 Elaine has been in in practice since 1994 and teaches medical science at the School. She was a research scientist in marine biology and microbiology. She studied homeopathy at the British School of Homeopathy (BSH) and graduated in the mid 90s, as well as having three children, two dogs, several cats and ducks along the way.

She has been teaching medical sciences at the BSH since 1993 and has also taught at the Welsh School and been a tutor for The School of Health since 1995. She works in South Wales and Copenhagen and has had some rewarding experiences working with the children of Chernobyl.

Recently Elaine wrote two new courses "Anatomy and Physiology for Homeopaths" and “Pathology and Disease for Homeopaths” which she really hopes will enthuse and inspire the homeopaths of the future with the wonders of the human body and allow them to integrate fully their homeopathic knowledge with medical science.

Elaine says: I was working in Cambridge and somebody came back from seeing a homeopath and told me she was aurum and how wonderful it was and that the woman was doing a First Aid course so I thought that sounds interesting knowing nothing about it at all but I was pregnant at the time and that’s thirty years ago and my son was then my first guinea pig so always the best, guinea pigs and then I had two other guinea pigs thereafter so I used it with children, knew that it was so effective for children, took that fear out of being a mother, in the middle of the night prescriptions and all that, so that was that, yes and at the time I wanted to study but because I had a child I couldn’t go full-time to London so it was only when we moved to Wales that I discovered that there were other colleges where you could go, newly opened, you could go part-time and I did and it was extremely wonderful.

What do you enjoy about your practice?
I’ve been in practice for over 20 years I think now and I was very interested because I had children I think to do children’s work and I think that’s probably the basis along with running evening courses actually because at the beginning there would be about thirty people in the evening class and they were supposed to be there for ten weeks and they would stay for thirty weeks and then they were nearly fully qualified but they came as patients and that was the sort of foundation and then I did a low cost children’s clinic with help from the Homeopathic Action Trust and that meant that I had built up a lot more experience with working with children which was lovely, but I see all sorts of people but I have mainly worked from home but I have worked in a couple of other clinics as well. It’s usually easier to work at home for some reason. After twenty-three, no well after twenty years or so I moved so that’s been quite a challenge to start again and build up again, but always a challenge, yeah.

What is your favourite aspect of teaching Homeopathy?
Again, by accident I started teaching Anatomy and Physiology, was teaching at college which was fun and then I realised it was the subject that people least enjoyed and why was that and I realised that really we had this very elegant model in homeopathy which was being thrown out with the bath water by year four so I developed some courses so that we could integrate the homeopathic model with the medical science which I think is very important obviously and I was actually actively teaching that for a while and then I wrote it down in a big headed moment, tried to get it published and so that was where you stepped in and it’s been so wonderful because I now have access or there is a network of people all over the World doing the courses and it’s so wonderful in the morning, I was saying to the students earlier, you turn on the computer and somebody in Iceland is in contact and somebody in South Africa and somebody in Swaziland and maybe three people in America and somebody in Japan and we’re all linked up with the course and I’m very happy that they seem to have been quite successful in terms of keeping people employed, you know and not complaining about their least favourite subject anymore and teaching here is always nice to meet the students and chivvy them into doing their work if they need to do it, but just yeah, I really enjoy  just being part of the homeopathic community.

Advice for someone contemplating the study of Homeopathy?
I think it’s a wonderful system of medicine, one of the reasons I’m very happy to be involved in it is because I care enormously about the environment and that we do know harm, we leave no footprint, but we hopefully can do some really, good stuff which has no lingering bad effects. It’s hard work, it’s jolly hard work but it just takes you over and I’m very, very grateful that’s what I do. I’m not an investment broker or something.

I think it's a wonderful system of medicine, one of the reasons I'm very happy to be involved in it is because I care enormously about the environment and that we do know harm, we leave no footprint, but we hopefully can do some really, good stuff which has no lingering bad effects. It's hard work, it's jolly hard work but it just takes you over and I'm very, very grateful that's what I do. I'm not an investment broker or something.