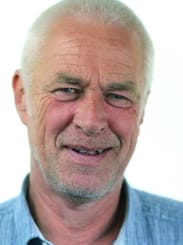 Bill has been practising since 1987 and has taught in various schools in England and Ireland since 1992. A graduate of our School, he founded the Welsh School of Homeopathy in 1995 and is particularly known for his practical interpretation of homeopathic philosophy and his artful case-taking. Bill is an inspiring presenter, gleaning methods from recent developments in psychotherapy to give students new approaches into ways to widen and deepen their understanding.

What got me into Homeopathy?
Well I knew a friend who lived in West Wales and I once gave his girlfriend a lift to London and it was late at night and she invited me in for a coffee, and we walked into this big drawing room and there was a like an oak bookcase, glass fronted bookcase and it was full of these amazing bottles with corks and copper plate script I looked at it and said “What are they?” and she said “they are homeopathic remedies” and I was immediately felt as if I’d stumbled upon an alchemists laboratory or something it was absolutely fascinating and you know it stayed with me that initial encounter with the medicines was the first thing that attracted me to homeopathy and then you know through various life events I ended up going to see a homeopath and knew instantly that that was my calling so it was like the first encounter was like a preliminary echo and then having experience with homeopathy myself I knew that that was what I would be doing for the rest of my life and I more or less dropped everything and started studying homeopathy.

What do you enjoy about your practice?
Sometimes the encounter with the patient is so exciting that its like exploring unchartered territory you know anything can possibly happen there is no format, there is no system its up to the patient themselves to reveal something which is fascinating and for me that’s a form of adventure of an exploration, so I really enjoy that, I love the medicines.  I love the process of teaching as well, I love everything about it, how wonderful to do a job that endlessly enriching.

How did you come to teach Homeopathy?
I always knew I wanted to do it, I knew somebody that ran a school in London and I said can I start teaching and she said how long have you been in practice and I said four years and she said wait another year because we like people to start after five years so I rang her up and said its five years and give me a job.  So I started teaching there and that was at the London College of Classical Homeopathy and I also started teaching in Dublin and then in 1994 / 1995 we started a school in Wales and about two or three years later somebody who was working at the school here invited me down to teach which was just amazing because having trained at this school the most magical thing was to come back and reengage with the school and with the students and start to teach so I have always known I wanted to do it, its like second nature.

What is your favourite subject within Homeopathy?
I love the philosophy, I like working straight from the organon to interpret it in terms as a processes actually as a guide book to energy, rather than look at it from a sort of modular perspective or a you know just as an instruction leaflet, the organon actually means instrument so I’m fascinated by the way in which it helps us to understand anything that can possibly happen in the therapeutic encounter so I am interested in the dynamic between the patient and the therapist and the medicine especially so the process of homeopathy I guess.

Advice for someone contemplating the study of Homeopathy?
I would tell them to start because Gurter was a contemporary of Hahnemann and Gurter said whatever you can do or believe you can begin it, because boldness has power, genius and magic in it.  So the idea is if you are thinking about it why not start doing it and see what happens because it’s a journey.  I think the School of Homeopathy is absolutely wonderful and it feels like home to me.

Somebody who was working at the school here invited me down to teach which was just amazing because having trained at this school the most magical thing was to come back and reengage with the school and with the students and start to teach so I have always known I wanted to do it, its like second nature.