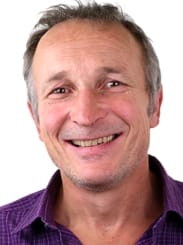 In 1995 in Glastonbury Festival Healing Fields a prescription  of Euphrasisa turned a hay fever afflicted farm vet homeopathic. The love of the subject led to additionally qualifying in human homeopathy. Subsequently the studying hasn’t stopped!

Having sold his Exmoor vet practice in 2003 Geoff now has a homeopathy only practice in west Somerset for people and animals.  He teaches farmers, vets, doctors and homeopaths at a number of colleges, lectures all over the world, proves lots of remedies, and runs frequent post graduate courses in the pub opposite his practice.  However he also never stops studying himself.  Homeopathy may have overtaken beer and rugby as his passion.

In the last five years Geoff has been interested in the origins of chronic disease, based around the concept of the separation of yin and yang.  This has led him to initiate the provings of testosterone, progesterone, LH, GNRH and pineal gland.   He is currently conducting a trial in the homeopathic treatment of canine osteosarcoma.

The SOH is one of the two best schools I have had the privilege to teach at.  The efforts of the principals are of great importance to the whole homeopathic world.  The rigour of the teaching is daunting for the students but watching real homeopathic understanding developing over the years is very exciting.  The venue is beautiful and akin to coming on holiday.

Geoff worked in many vet practices until owning a four-vet mixed practice on the edge of Exmoor for 11 years, and would have described himself as a rugby playing cow vet.  When his hay fever was cured overnight by homeopathy he began his homeopathic studies in 1995 and achieved the VetMFHom and RSHom in 2001, making him the only person qualified in veterinary and human homeopathy at that time.  In 2004 he completed the Dynamis Course with Jeremy Sherr.  He now owns a busy homeopathy only practice in Wiveliscombe, West Somerset for humans and animals.  Geoff is a sought-after homeopathy teacher and lectures widely nationally and internationally.  He teaches the vets in Bristol and wrote the curriculum and set up the Danish Veterinary School with Lise Hansen.  He teaches routinely at three UK homeopathic colleges and has been a visiting lecturer at most of the others.  He was one of the founding vets of the Homeopathy at Welly Level school, which has now trained over 350 farmers.    He started the Animal Energy UK homeopathic veterinary conferences (now in their 21st year) and has helped organize ten of these.  He has studied extensively with many of the world's leading homeopaths, particularly the Joshis, Sherr, Sankaran, Scholten and David Lilley.

Geoff loves west Somerset for walking, cycling, rugby, farms, wild swimming and cider .  Live music , festivals and dancing are passions he indulges as much as possible.  In 2018 his children have just left home, so freedom beckons - maybe a very long walk  as soon as the canine bone cancer trial is finished.  Recently an interest in Buddhism has blossomed, and exploring that is very exciting.

“It's a dangerous business going out of your door.  You step into the road, and if you don't keep your feet, there is no telling where you might be swept off to"
JRR Tolkien (Bilbo)

As I teach I hear things back from the students and that gives me more connections, I learn from talking to the students because they have an idea and it suddenly fits into the pattern which I am working out for myself. I enjoy seeing the light come on in their eyes when they understand.