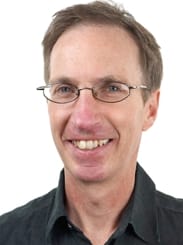 Jon first heard about homeopathy in 1990 from his then flatmate, Chris Aukland; a vet with a huge enthusiasm for the subject. He was then a curious patient for a few years before deciding to study at The School of Homeopathy in 1995.

Jon works from home in a village near Bath - The Holistic Family Practice is shared with his wife, Antonia, a former GP who now practices Lifestyle Medicine. He has been a regular lecturer at the School of Homeopathy since 1999 and a supervisor since 2005. Jon’s current interests include the Joshis MAP and Yakir plants systems.

Jon says teaching at the school is a day a sheer delight. I really enjoy spending time with groups of fascinating people who have a wide breadth of knowledge and such rich experiences to share.

Jon originally trained as a research scientist studying the sophisticated way that crystals of calcite are mineralized in living organisms such as plankton and molluscs. His journey since then has been to integrate his scientific background, with interests in meditation and counselling, into homeopathic practice. Jon took part in the provings of Falco, Positronium and Heroin and completed post-graduate training with The Joshis from 2004-2009.

When Jon is not practicing homeopathy, he is busy parenting two teenage girls and a teenage puppy called Milo. Jon is also a very keen rock climber and has a zeal for exercise and nutrition. In 2016, Jon and his family moved to Christchurch, New Zealand for a one year sabbatical and he leant to surf in the pacific ocean and cope with earthquakes!

"A hole needs attention. That's all."

I really enjoy talking about disease and clinical syndromes and really understanding disease in the same way a GP would, so we have that common language, and thinking about it on a very objective utonian way, but at the same time linking it together with a patients story of their life with other ailments they have and then really linking it through to some deeper clinical experience they have.