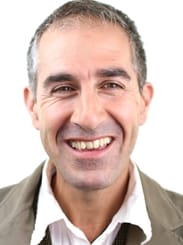 Nick graduated from the School in 1993 and set up practice from his home in Devon. Later he attended Jeremy Sherr's Dynamis post graduate course which helped him develop his homeopathy skills further. The School has always remained close to his heart and he works with us in many levels as mentor, supervisor, and teacher. Nick's passion for homeopathy really began through reading Kent's Lectures on Homeopathic Philosophy which he still enjoys to this day.

Nick says, So I have been doing homeopathy since about 1991 and I come from a medical family, my father is a doctor and my mother is a nurse so I guess it was kind of in the blood.  I was always really interested in anything to do with the human body and the way it works so biology at school it was my favourite subject and then I developed when I was a teenager started to develop in all things alternative and especially kind of esoteric stuff and then I was away travelling for many years and that interest became stronger and stronger and when I came back to settle in England I decided to move to South Devon to the town of Totnes which is a big sort of hub for all things alternative and at that time I was at a point of my life where I really wanted to study something and go into something and because I was very interested in the field of alternative medicine and I had heard of homeopathy and also how it was the cutting edge of alternative medicine I decided that I wanted to study homeopathy even though I didn’t really know anything about it so that’s one way of saying how I got into homeopathy but the other way of saying it is that it found me, because I can say that it was many ways the very subconscious but right decision for me because what happened what I signed up for the course with the school of homeopathy and at that time it was correspondence for the first year or two and I had delivered a big box of books and this was before I really knew anything about homeopathy, I signed up and paid for the whole course and it must have felt right within myself I opened my box of books and I picked out the first book which was, well actually it was the smallest book I think I could find, and I thought well I will just start with that, and it was George Vithoulkas Medicine of the New Man, and so I started reading this book and then immediately after that I read Kent’s Philosophy on Homeopathy and it was just like the penny dropped.
Everything fell into place and I was just like whoa now I know why I am studying homeopathy so that was kind of how I got into homeopathy, and then it just went from there really I became very impassioned and spent almost every waking moment reading about homeopathy, studying homeopathy and thinking about homeopathy boring everybody stupid as well, that’s how I got into homeopathy.

What do you enjoy about your practice?
I practice down in Devon and also up in the Stroud area a bit and it took a while to get my practice going probably until I had a pretty full practice it was probably four or five years maybe a bit longer and I had to really plug away at the beginning  and in those days there weren’t relatively so many homeopaths, even in Totness there were only about four or five of us now there is probably like 20 or 30.  But the way I develop my practice was to talk about homeopathy a lot so basically I would talk about homeopathy to almost every single person that I met if they showed even the slightest interest and at that time I also had a young child who was going to school so I would talk to parents in the playground when I was going to pick up my son, this sort of thing but the main thing that helped me to really grow my practice was doing talks, so I probably am doing a talk every month or two and usually I would say that two or three people who came to that talk would come as a patient or they would send somebody else a friend or a relative and the other thing I used to do every year was to run a short course on homeopathy how to use homeopathy at home for treating various common illnesses and stuff and those two things together would really help to build my practice up.
The other thing I did was I ran a children’s clinic for the first few years in practice, probably for the first five years I ran a Saturday mornings children’s clinic and a lot of people will come into homeopathy through their children, and that’s what I saw as they bring their kids first and then a few weeks or months down the line the mother would surely come and then maybe the husband would be dragged along eventually and sometimes not, and that’s how my practice grew and evolved and for many years I had a very busy practice and I actually made a living solely from homeopathy and in latter years that’s dropped off for various reasons and now my practice is much smaller and quieter which is also lovely so I think I have done my really busy stint of now I am going into more quiet time which suits me really well.

What is your favourite aspect of teaching Homeopathy?
Well I love teaching homeopathy for one thing it keeps me very engaged with homeopathy for myself so I coming to teach a subject so I then have to study or refresh myself on that subject in depth, so it keeps me very engaged with all different subjects in homeopathy, the philosophy or the case taking or material medica or whatever and also I enjoy the interaction with the students and I actually learn a lot myself through teaching the students because we have a room full of very capable people from many different fields of experience so are bringing their own wealth of information so its like a sharing ground so we all learn a lot and its not just me standing up talking.  In fact, I really like an interactive kind of classroom and more of a discussion cos I feel that so much more gets learnt and remembered that way, because the atmosphere is really engaging and really interesting people will remember.  But mostly I really enjoy teaching, I don’t even know why I do it to be honest I just do.

Advice for someone contemplating the study of Homeopathy?
Its absolutely such a wonderful subject to study because its so broad and so deep that you will never get bored or reach the end because there isn’t one.  You just go on and on and on and because homeopathy is really about the study of life and the study of human beings and so it branches out into every other subject conceivable so its such a broad subject and you can never become tired from it, because there is always more to learn and always more to understand.

What are your thoughts about the School of Homeopathy?
So I have been with the school of homeopathy from when I trained which was, I started the course in 1991 when my son was born and he is now just coming up to 23 so I have been involved with the school for 23 years and for me it feels like a part of my family, and I feel very attached to the school and absolutely love coming here and so I love the way its developed from its very very homely atmosphere when it used to be at Yondercott which was really cosy and used to be like a family and then coming up to Hawkwood at first was like oh what’s this, but that’s really, it took a little bit to get used to it but now I really love Hawkwood and coming here, because everyone can be here together at the same time at the same weekend so we can all learn off each other and the lovely atmosphere here and the trees and the views and its just a very very friendly place to be, and you will be very well looked after if you come to the school of homeopathy, very very well looked after.