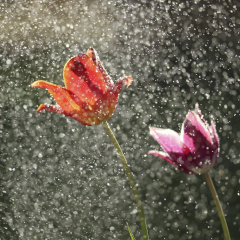 The well-known saying, ‘April showers bring May flowers’, originated in the 1573 work by Thomas Tusser, Five Hundreth Pointes of Good Husbandrie. Part long poem, part instructional, part observational work, this piece was all about the farming and country customs of Tudor England.

Of course, the interpretation of this couplet to mean that a “period of discomfort or hardship can provide the basis for a period of happiness and joy”1 is what we know it for best. However, there is meteorological truth to it as well, as in the UK the jet stream starts to move northwards in early spring, allowing for strong winds and rain to be brought in from the Atlantic. Hence... April showers.

Since we’re now through the April showers, and into May, let’s talk about the flowers, shall we?

So many homeopathic remedies are made from flowers. Of course, we know many of them well – Pulsatilla, Staphysagria, Arnica... the list goes on. So we thought we’d explore some lesser-known flower remedies in the Materia Medica.

Paeonia (Peony) – is of particular use in cases of haemorrhoids or rectal fissures. The excessive pain after stool may have the unusual modality of being ameliorated by holding the buttocks spread apart. May also be a remedy for chronic ulcers on the lower parts of the body, the breast, and the rectum.

Cactus Grandiflorus (Night-blooming Cereus) – produces a characteristic sensation of constriction, as that of an iron band or wire. Has a particular affinity for circular muscular fibers, especially the heart and arteries. Sadness, fear of death, and crying out with the pain are noted symptoms, along with the classic cardiac symptom of numbness or pains extending into the left arm.

Podophyllum (Mayapple) – explosive diarrhea is what this remedy is best known for. Liquid stools that are passed with much gas so they soil the whole toilet bowl are characteristic. It is noted that stool is profuse and often horribly offensive smelling. There may be audible gurgling in the abdomen before stool, and great weakness after. Talkativeness might be present in some cases.

Thlaspi Bursa Pastoris (Shepherd’s Purse) – can be of use in bleeding conditions, especially during pregnancy. Frequent nosebleeds, bleeding during pregnancy, haemorrhage during labour, copious menstruation, bleeding between periods, and blood in the urine all show up in this remedy.

Cistus Canadensis (Rock Rose) – chronic and recurrent upper respiratory complaints including chronic rhinitis and sinusitis are a feature. This is a cold remedy, with chilliness as a feature, along with general winter aggravation and local aggravation from inhaling cold air. Also of note is the sensation of coldness in various individual parts of the body, such as the mouth or stomach. A craving for cheese may also be present.

Stellaria Media (Chickweed) – sharp, shifting, darting rheumatic pain with stiffness of joints is the main area of use. Irritability and laziness may be present. When Bryonia and Rhus Tox both seem indicated, we may find this remedy useful, for it has marked pain from the slightest motion, but is ameliorated by continued motion. The modalities of worse in the morning, better in the evening, and averse to touch have been noted.

We hope you’ve enjoyed this May stroll through the garden of some lesser-known homeopathic flowering remedies. Hopefully the April showers bring an abundance of flowers all summer long for us to enjoy.

Photo by michael podger on Unsplash