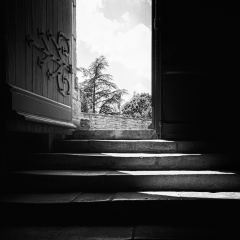 The Beginnings of Things

January is a month of beginnings. Named for Janus, the Roman god of doorways and gates, beginnings and transitions, this month typically begins with a transition - a celebratory ringing out of the old, and a list of resolutions and goals ushering in the new. In Roman mythology Janus was present at the beginning of the world. He has two heads, facing in opposite directions, therefore having a simultaneous view of the past and of the future. Janus was also said to be the first person, god or human, to mint coins, and is the initiator of new financial enterprises.

What homeopathic remedies are typically useful in the beginnings of things and transitions? Many remedies have a reputation for helping ease suffering at these times, and we explore a few here.

Often one of the first remedies administered for the beginnings of a cold or flu, it has a keynote of sudden onset, especially after being out in the cold or wind. The theme of sudden onset carries throughout the remedy, and it is one of our best remedies for shock, which can be thought of as trouble with transition, difficulty in processing the sudden change from the former way of being to the present situation. This reminds us of Janus at the gate, looking to the past and future at once.

This is very often the first homeopathic remedy encountered by people, and it’s frequently the first remedy taught in homeopathic first aid courses. And as often as not, both lay and experienced practitioner alike will begin treatment of an injury with a dose of arnica. Good at treating many things – bruising, bleeding, pain, swelling, and head trauma, one of the marked features of this remedy is the denial of injury. “I’m fine, I’m okay, don’t touch me, don’t bother with me, I’m fine” is the tune of the Arnica patient. This is also a struggle with transition – a denial that one has passed across the threshold from well to injured.

Perhaps most commonly used in cell salt format, this remedy is useful in the beginnings of colds and flus. Infections, inflammations, fatigue and weakness come to mind for this remedy. In the early stages of an illness with a low fever, malaise, and no other distinguishable symptoms to prescribe on except knowing one is ‘getting sick’ this remedy can prove useful. It can ease the generalized inflammation in mucous membranes during a cold, which in turn eases the symptoms of running nose, throat irritation, and cough. Ferrum Phos displays the polarity symptom (the other side of the coin) to Aconite in its pace; the Ferrum Phos illness tends to be slow developing as opposed to sudden.

If you’re following through on some of those New Year’s resolutions and starting something new, Gelsemium might help with any anxious jitters. One of our main remedies for ailments from anticipation, Gelsemium has all the classic ‘nervous’ symptoms: trembling, weakness at the knees, chills up and down the spine, trouble speaking, needing to go to the loo often (urge to urinate and diarrhea can both make their appearance). Courage to enter the doorway into a new class or new hobby or habit can be fortified if the symptoms match.

January 1st you commit to a new exercise regimen; January 2nd you’re terribly sore from all of those overworked muscles that may have been a bit underused in the past few months. The after-effects of over-exertion often respond well to a dose of Rhus Tox. Typically, you might need this remedy if you feel stiff and sore, especially when first moving, and feel better with warmth, stretching, and after you’ve been moving for a while and limbered up. Maybe you’ll even feel good enough to tackle day 2 of your workout routine!

This is a wonderful month for new beginnings and happy transitions, and maybe the road to sticking with them will be just a little bit smoother with the help of homeopathy to support along the way.

Photo by Peter Herrmann on Unsplash